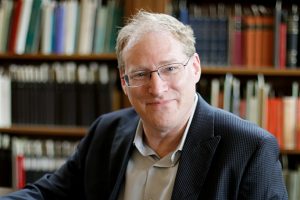 David’s first book, A Critical Companion to William Butler Yeats (2009), is a 652-page encyclopedia of the poet’s life and work. It includes interpretive essays on Yeats’ poems, plays, and prose, as well as involved accounts of Yeats’ activities and connections. Post-Yeats, David has co-translated and co-edited the Taipei Fine Arts Museum’s 446-page descriptive catalogue The Search for the Avant-Garde: 1946–1969 (2012).

David has written frequently on twentieth-century Chinese art and Asian cinema, and he collects Chinese paintings and Japanese woodblock prints with his wife Li-ling Hsiao, associate professor of Chinese art and literature in the Department of Asian Studies.

He has also served as vice-president (2014) and president (2015) of the Southeast Conference of the Association for Asian Studies.

His present research projects include a translation of Xu Wei’s canonical drama anthology Four Cries of the Gibbon (1614) and a study of the Chinese modernist painter Lin Fengmian (1990–1991).