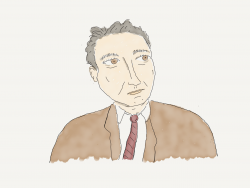 Has there ever been an American novelist as allergic to the pigeon-hole as Percival Everett? In his hands, the novel form is as elastic as silly putty. Equally at home in the satirical, the thrilling, and the tender, Percival Everett is the author of more than thirty novels, short story collections, and books of poetry, including the forthcoming Dr. NO (2022); The Trees (2021), which won the Anisfield-Wolf Book Award for fiction and has been long listed for the 2022 Booker Prize; Telephone (2020), a finalist for the Pulitzer Prize in fiction; So Much Blue (2017); I Am Not Sidney Poitier (2009); and Erasure (2001).

Everett’s stories have appeared in the Pushcart and Best American anthologies, and been featured on NPR’s Selected Shorts. His many honors include the Ivan Sandrof Lifetime Achievement Award from the National Book Critics Circle, the Dos Passos Prize, the PEN Center USA Award for Fiction, the PEN Oakland/Josephine Miles Literary Award, the Hurston/Wright Legacy Award for Fiction, and the Academy Award in Literature from The American Academy of Arts and Letters.

Percival Everett was born in Fort Gordon, Georgia, and grew up in Columbia, South Carolina. A graduate of the University of Miami, he studied philosophy at the University of Oregon before transferring to Brown, where he earned a master’s degree in fiction. Boundless curiosity propels his writing; everything interests him—science, philosophy, painting, jazz music, fishing, mule training. It seems there’s no system of thought or art with which he neglects to converse, and no facet of American life he deems too sacred to skewer. His novels satirize myriad institutions, traditions, and people, and yet Everett has said, “I don’t take my political concerns, and the philosophical ideas I’m trying to address, to work with me. . . . No one needs to hear my opinion or my message about anything. So I leave behind all that stuff, and I just create the world.”

These worlds—often versions of the American West or South—are alive with trouble, abundant with nonsense, and rich in hilarious and horrifying detail. We watch the goings-on and laugh, then wonder if we ought to be laughing. How can this be happening? we ask. How can reality and absurdity be such close kin? If we sometimes find the novels tricky to navigate, that’s part of the point. In a Paris Review interview, Everett said, “I want a readership that wants to read things because the work is difficult, not because it’s only fun. I want the fun to be in figuring it out. That’s what reading is all about.”

Everett is Distinguished Professor of English at the University of Southern California. He lives in Los Angeles.

Everett’s public reading will be on October 6 at 7:30pm in Moeser Auditorium in Hill Hall.

Email any questions to ThomasWolfe@unc.edu

History of the Thomas Wolfe Prize and Lecture

The Thomas Wolfe Prize and Lecture honor the memory of one of The University of North Carolina at Chapel Hill’s most famous alumni, Thomas Clayton Wolfe (Class of 1920). Established in 1999 with an endowed gift to the Department of English, the program recognizes contemporary writers with distinguished bodies of work. And in doing so, the program seeks to give University students and the surrounding community the opportunity to hear important writers of their time.

The Department of English bestows this prize each fall, around the time of Wolfe’s October 3 birthday. In addition to receiving prize money and a medal, the honored writer comes to campus as the University’s guest and delivers a lecture, which is free and open to the public. This event is a well-attended major campus and community occasion.

Thomas Wolfe is best known for his novel Look Homeward, Angel, which was published to rave reviews in 1929. Before his death in 1938, Wolfe also published Of Time and the River (1935). His novels The Web and the Rock (1939) and You Can’t Go Home Again (1940) were published posthumously. Wolfe’s writings reflect a largeness of spirit and an expansive vision of life, while anchored in geographic place.

Sponsors of the 2018 Thomas Wolfe Lecture are alumnus John Skipper (BA English 1978), The Thomas Wolfe Society, and the Department of English and Comparative Literature. The prize money comes from the Thomas Wolfe Endowment Fund. UNC Alumnus Ben Jones (class of 1950) gave the medals that each recipient receives. 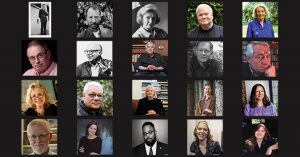