Scholarships and Awards in Creative Writing

Thanks to the generosity of various donors, there are a number of awards—available at different stages of a student writer’s career at UNC—designed to make possible continued study at the University and in the Creative Writing Program, and also to reward excellent work in fiction, poetry, and creative non-fiction by undergraduate students. 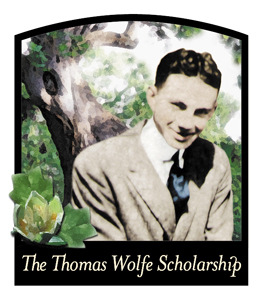 This unprecedented program for student writers—which began in 2002 and is funded at roughly the same level as the University’s prestigious Morehead Scholarship—provides a full scholarship to one incoming student each year for four years including summer research stipends. The scholarship is not limited to fiction writers: applications are welcomed from student poets, playwrights, fiction writers, essayists and journalists across the country, and each Wolfe Scholar will be a young writer who shows extraordinary promise. The scholarship was endowed by Frank Borden Hanes Sr., class of 1942, to honor Wolfe, class of 1920—who as a UNC student edited The Tar Heel and wrote and starred in “The Return of Buck Gavin” (one of the first productions of Playmakers Repertory Company), later remembering Chapel Hill fondly in his classic 1929 novel Look Homeward, Angel—and to support the creative writing program. Students must apply for this scholarship during their senior year of high school. For more information, write Bland Simpson, Stephanie Elizondo Griest, and Gaby Calvocoressi, Co-Directors of The Thomas Wolfe Scholarship Program, or review the scholarship website.

Juniors and seniors are eligible for this award, designed for a student who is an English major and a Creative Writing minor, who qualifies for financial aid from the University, and who demonstrates a serious interest in the publishing world. This scholarship program was initially funded by Random House, in memory of Wanda Chappell ‘81.

The Charles and Rita Collins Scholarship

This is a needs-based award—made possible by Charles D. Collins, MD of Rockingham, N.C.—meant to assist students who are Creative Writing minors.

For more information on the Chappell and Collins Scholarships, please contact the Director of Creative Writing, Daniel Wallace.

Currently, there are four literary prizes for seniors at Carolina: the Robert B. House Memorial Prize in Poetry; the Louis D. Rubin, Jr., Prize in Fiction; the Max Steele Award in Fiction; and the Ann Williams Burrus/Academy of American Poets Prize, administered by the AAP in New York.

There are two prizes for juniors: the Blanche Armfield Prize for Poetry, and the George B. Wynne Award for Fiction.

Other annual prizes, each of which comes with a cash award, include: the Bland Simpson Prize in Creative Non-Fiction, awarded to three undergraduates for outstanding literary essays and belles-lettres; the Mini-Max Short-Short Fiction Award, founded by former Creative Writing Program Director Max Steele, a practicioner and proponent of very short fiction, and awarded for complete short stories of no more than 750 words; the Robert Ruark Award for Non-Fiction, founded by the Robert Ruark Society of Chapel Hill in memory of the celebrated novelist-journalist, and awarded for writing about the natural history and heritage of North Carolina; and the Suzanne Bolch Award, founded by Ben and Ann Bolch in honor of their daughter, filmmaker/producer Suzanne Bolch, which provides summer support to a creative writing minor who seeks to develop an original, independent project designed to stimulate and expand the writer’s imagination and artistic vision.