“Persistence as Resistance: An Evening with Ana Castillo”

Distinguished author Ana Castillo will read from her poetry and prose collections tracing her writing as acts of resistance. One of the best-known Mexican-American writers working today, Castillo’s prose blends elements of oral history and established literary tradition with innovation and experimentation. Ilan Stavans has called her “the most daring and experimental of Latino novelists.” Her novel Sapogonia was a New York Times Notable Book of the Year, she received the Before Columbus Foundation Award for her first novel The Mixquiahuala Letters, and she has also been awarded the Carl Sandburg Award, a Mountains and Plains Booksellers Award, a fellowship from the National Endowment for the Arts in fiction and poetry, and the Sor Juana Achievement Award by the Mexican Fine Arts Center Museum in Chicago. In 2015, Castillo won a Lambda Literary Award for bisexual fiction with her book Give It to Me.

Castillo’s latest work, Black Dove: Mamá, Mi’jo, and Me, examines what it means to be a single, brown, feminist parent in a world of mass incarceration, racial profiling, and police brutality. The book is “a high-wire act to bring together a combination of personality characteristics and specific cultural touchstones” (Kirkus). With startling humor and love, Castillo weaves intergenerational stories that take us from Mexico City to Chicago. In doing so, she narrates some of America’s most heated debates and urgent injustices through the oft-neglected lens of motherhood and family. Black Dove won an International Latino Book Award and a Lambda Award for best bisexual nonfiction. The event is free and open to the public and will include a book signing. 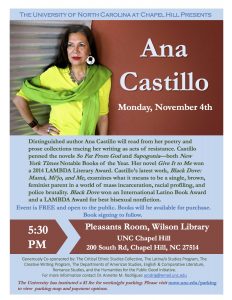