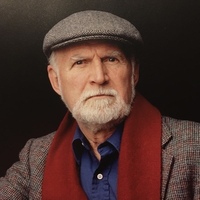 The following obituary was created by Dr. Thorton’s family and published on the Cremation Society of the Carolinas website.

For forty four years Dr. Thornton was a beloved teacher of literature at the University of North Carolina at Chapel Hill, where he held a chaired professorship in the English Department. His primary area of research and publication was Irish and British literature, and he published five books of literary scholarship and numerous articles.  He was internationally known for his work on James Joyce. However, he thought of himself first and foremost as a teacher. His favorite course was a Great Books course that he taught to Honors Freshmen from 1962 until his retirement in 2005.  He also cherished his role as  teacher and mentor for his graduate students, many of whom have gone on to have impressive careers in the U.S and Europe. He received five awards for excellence in teaching, spanning the years 1970 to 2000, when he was given the Board of Governor’s award for Teaching Excellence. He was very active in the South Atlantic Modern Language Association and the American Conference for Irish Studies. As part of his service to the University, he chaired a committee in 1970 to review and recommend revision of the  undergraduate curriculum. That curriculum served the university for more than twenty years. He was proud to say that he nominated Seamus Heaney for an honorary degree at UNC before Heaney was a Nobel Prize winner. He also was pleased that he chaired the committee on Honorary degrees the year Doc Watson was nominated.

Weldon Thornton was a man of great energy and curiosity who enjoyed many pursuits. He loved the adventure and education of travel. He shared professional travel opportunities with family, and most summers were spent exploring the U.S. and countries abroad. He was audacious enough to think that he could build a house for his family. In the summer of 1971 he did just that—with the help of his carpenter father and a small crew of family members, including two thirteen- year olds. He also earned the enthusiastic, if sporadic, encouragement and help from students, friends, and strangers. This summer, fifty years later, the family still calls this home. When his sons were teenagers they built another small house. It was an experience he wanted them to have. In 1984 he built the family a vacation home in the North Carolina mountains, which they still enjoy today. He loved working outside, and his mountain land provided him the opportunity to mow his sloping pasture with his tractor and brush cutter. He easily related to people of all walks of life and was readily accepted into the mountain community. He was at work on a book of intellectual history until the infirmities of his illness caused him to lay it aside.