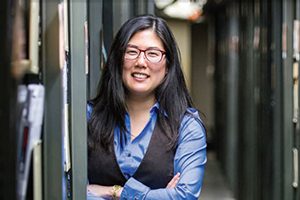 Professor Heidi Kim’s work ranges through nineteenth and twentieth-century American literature and Asian American studies. Her monograph Invisible Subjects: Asian Americans in Postwar Literature (Oxford UP, 2016) resituates the work of Ralph Ellison, William Faulkner, John Steinbeck, and the Melville Revival critics through recent advances in Asian American studies and historiography. Illegal Immigrants/Model Minorities: The Cold War of Chinese American Narrative (Temple UP, 2020) extends this focus on the Cold War to the writing of and about Chinese Americans, who were dogged by the stigma of illegal immigration and paranoia about Communist infiltration. She also researches and speaks extensively on the literature and history of the Japanese American incarceration, including Taken from the Paradise Isle (UP Colorado, 2015), which won a Ka Palapala Po’okela Award from the Hawaii Book Publishers Association.