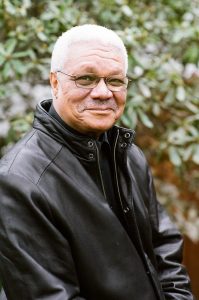 Al Young “is a man unafraid to talk about the human spirit, about the immateriality of things, about the perfectibility of man.” With these laudatory words, Creative Writing faculty member Randall Kenan introduced the 2011 recipient of the Thomas Wolfe Prize. Young, a voice of many talents and genres, delivered the annual Thomas Wolfe Lecture on October 4 in the restored Old PlayMakers Theatre. He became the twelfth recipient of the prize as Anna Faison, Thomas Wolfe Scholar 2015, placed the medal around his neck.

In his lively talk, Young paid tribute to Wolfe by noting significant and interesting intersections of their work. He paired passages from his own writing and Wolfe’s, inviting the audience to see the approaches taken by two very different writers to express common emotions and similar ideas. The two authors’ tributes to the month of October were especially apt as the audience of Carolina students and townspeople congregated on the beautiful fall evening.

Kenan declares that Young is “master of nearly all literary trades.” Without doubt, he is one of the most versatile writers of our time. He is a poet, a novelist, and an essayist. He has also written criticism and screen plays. And, as a musician himself, he has written frequently about music. Kenan points out that, in addition to these accomplishments, Young is a “renowned educator and cultural ambassador and public intellectual.” He adds yet one more deserving label to this impressive catalog: “a true folk artist.” 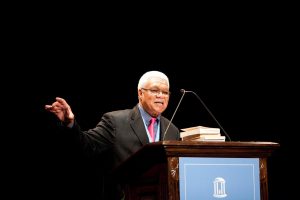 Young has won multiple accolades, including Guggenheim and Fulbright and National Endowment for the Arts Fellowships, the PEN-Library of Congress Award for Short Fiction, the PEN-USA Award for nonfiction, two American Book Awards, two New York Times Notable Book of the Year citations, the Richard Wright Award for Excellence in Literature, and many other prizes. He served as Poet Laureate of California from 2005 to 2008.

The Thomas Wolfe Prize recognizes a writer who has made a significant contribution to writing in the humanities and whose work befits the ambition and scope shown by that of Thomas Wolfe. The breadth and depth of Young’s works—and his overarching embrace of the human spirit through those works—makes him a deserving recipient.

The Department continues to be grateful to the generous donors who endowed the prize money and to Ben Jones who provided the medals for the Thomas Wolfe Prize. In addition, the Department thanks the Morgan Writer-in-Residence Program, established by alumni Allen and Musette Morgan, which sponsored the lecture and events. Previous recipients of the prize include Tom Wolfe, Larry Brown, Elizabeth Spencer, Pat Conroy, Ellen Gilchrist, George Garrett, Fred Chappell, Reynolds Price, Robert Morgan, Roy Blount Jr., and Lee Smith. 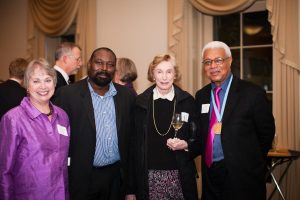