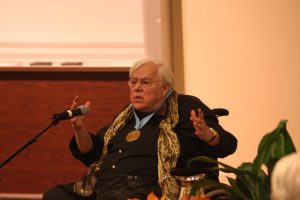 With his insights and reminiscences, Reynolds Price cast a large net over his audience at the 2007 Thomas Wolfe Lecture—and he pulled in every audience member as his catch for the evening. Price, noted writer and esteemed teacher, traveled seven miles down the road from Durham on October 3 to receive the 2007 Thomas Wolfe Prize, an award that honors UNC’s most famous literary alumnus, Thomas Wolfe (1920), author of Look Homeward, Angel. He found an enthusiastic welcome from a standing-room-only crowd in Carroll Hall auditorium.

Lawrence Naumoff, member of Carolina’s Creative Writing faculty, introduced his fellow-writer, a friend of many years. He described Price’s work as “honest and clear, elegant when it should be, often poignant and funny, and all of it a treasure that is North Carolina’s literary good fortune.” Speaking about the wide appeal of his works, Naumoff observed that Price’s readers “simply wanted to follow his characters in their world, and listen to them talk and see what would next happen in their lives.”

As tradition dictates, the freshman Thomas Wolfe Scholars presented Price with the medal. Denise Rickman and Maria Devlin (class of 2011) were pleased to meet and honor the noted writer. Other creative writing students also had a chance to talk with Price in a session earlier in the day, when he discussed his own writing development and process and fielded student questions.

Through his teaching and his writing, Price has had a far-ranging and significant impact upon the literary world. In his fifty years on faculty at Duke, he has taught and mentored numerous writers, among them Anne Tyler, an experience he reflected upon in his lecture. As a Biblical scholar, his works include A Serious Wondering: The Ethics of Jesus Imagined. His novels, poetry collections, and memoirs include A Generous Man, The Surface of the Earth, Noble Norfleet, Blue Calhoun, Roxanna Slade, Vital Provisions, The Good Priest’s Son, A Long and Happy Life, A Whole New Life, and Clear Pictures: First Loves, First Guides. He won the National Book Critics Circle Award for Kate Vaiden. As if this evidence of his vast range were not enough, he has also written essays, children’s books, stage plays, and NPR commentaries.

Price expressed his pleasure in experiencing firsthand Carolina’s warm appreciation of writers and enjoyment in celebrating the literary arts. His audience, in turn, was drawn to the celebrated North Carolina man of letters who wielded his rich voice as eloquently as he wields his pen. Price’s excursion to Chapel Hill brought homage to him and great pleasure to his listeners, who experienced one of the finest characteristics of a successful literary gathering: the mutual appreciation between writer and audience.

Alumnus Ben Jones has endowed the prize money and medals for The Thomas Wolfe Prize and Lecture; the Morgan Writer-in-Residence Program and the Department of English and Comparative Literature sponsor the events. The annual occasion honors an author who has made a significant contribution to writing in the humanities and whose work befits the ambition and scope shown by that of Thomas Wolfe. Previous recipients include Tom Wolfe, Larry Brown, Elizabeth Spencer, Pat Conroy, Ellen Gilchrist, George Garrett, and Fred Chappell.