Melissa Faliveno is joining the department on the cusp of the release of her first book, TOMBOYLAND. She has been working on the project for about ten years. The essays cover a variety of subjects Faliveno finds herself “obsessing” over in her writing: “gender, class, and the American Midwest.” The book “tackles a host of topics—from fastpitch softball, F5 tornadoes, faith, and myth to gun culture, motherhood and chosen family, masculinity and violence, bisexuality and androgyny, moth infestations, Midwestern food, and more.” Faliveno is already working on two more books, both on similar subjects to TOMYBOYLAND. “I think in some ways I’ll probably always be writing about things like class, the body, and the Midwest,” says Faliveno.

Faliveno is the former senior editor of Poets & Writers Magazine. Her essays and interviews have appeared in Esquire, Bitch, Ms., Prairie Schooner, DIAGRAM, Midwestern Gothic, and Green Mountains Review, among others.

Primarily an essayist, Faliveno is drawn to the genre’s “possibilities of form, function, structure, and subject.” This versatility is what keeps Faliveno coming back to essays: “The essay can do, and be, pretty much anything a writer wants it to be. As my Intro to Creative Nonfiction students have probably already discovered, I get very geeked out about this.”

As an instructor at UNC this fall, Faliveno is bringing her excitement about the possibilities of writing to her Introduction to Creative Nonfiction class. One of her favorite parts of teaching is when students share her level of excitement about writing: “The moment when a student gets excited about what an essay or work of nonfiction can do—beyond those traditional forms we’re taught early…When their own work makes them yell, ‘Yes!’ It’s an electric thing, and I just love it so much.”

When she’s not writing or teaching, you can find Faliveno rocking out. A member of the indie rock group Self Help, she sings and plays guitar and keyboard; the group released its first full-length record, Maybe It’s You, in 2018. 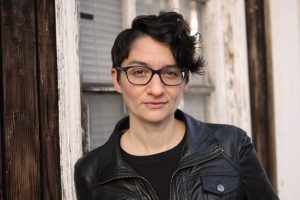