“Founded in 2020, the Asian American Center’s mission is to cultivate a critical understanding of Asian American peoples, cultures, and histories. Through education, organizing, and advocacy, the AAC will engage and empower Asian American students, faculty, and staff and the greater Carolina community. The AAC will enhance the University’s commitment to excellence by expanding access to interdisciplinary learning and preparing the next generation of leaders for an increasingly multicultural society.”

The campaign to create an Asian American Center on campus began in 2019 as a collaborative effort between 11 undergraduate students and two alumni, Barb Lee (‘88) and Eugene Lao (‘91).  The idea for a center came when Lao planned to make a donation of $100,000 to the Asian American Student Association; Lao founded the original Asian Students Association in 1989. Instead of accepting the donation, the AASA and its president at the time, June Yom, decided to approach Lao about establishing an Asian American Center on campus. According to Sean Nyguen, the director of the campaign for the Center, in an interview with The Daily Tar Heel: “We thought, ‘What would be a dream goal?’ And a dream goal would be an Asian American Center.” The Board of Trustees approved the proposal for the center in January 2020, and the campaign continued fundraising for the Center’s physical space.

Kim was integral to the establishment of the Center: “For years, I worked with faculty partners like Jennifer Ho and Morgan Pitelka to try to raise the profile of Asian American studies at this university. I was part of the Provost’s Committee last year that oversaw the official proposal and establishment of the AAC.” After Kim’s efforts in making the Center a reality, she was selected to be its director.

As the inaugural director of the AAC, Kim feels “a heavy responsibility” to “set the tone for the programming and focus of the AAC,” and particularly wants to ensure that the Center is ethnically diverse and inclusive of the entire Asian American population on campus.

Regarding the future of the AAC, Kim has big plans: “I want to create a real flow in and out of campus to enhance education and engagement with Asian American studies and communities. I plan to bring world-renowned scholars and artists to this campus to engage with our faculty and students. I also want to send students, staff, and faculty outward to volunteer in the community, attend conferences, and conduct research.”

In her first director’s letter, Kim acknowledges the importance and the challenges of beginning the Center during such tumultuous times. In light of this, the Center plans to bring the community together to investigate racial identity and the inflammatory rhetoric around COVID-19, while still celebrating Asian America. Although the Center will remain a virtual space this fall, Kim stresses three hopeful keywords for this year: “Curiosity. Community. Celebration.”

Keep up to date with the AAC through their social media: 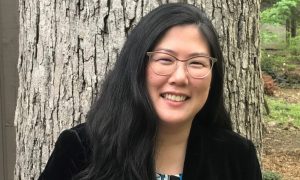