ECL Professor of Film Martin L. Johnson has been listed as a finalist for the Richard Wall Memorial Award (previously the Theatre Library Association Award) for his 2018 book Main Street Movies: The History of Local Film in the United States.

The book chronicles a historical phenomenon that Johnson calls “local film,” which proliferated from the late 1890s through the 1950s. In local films, a small town is filmed, and the result is screened in a theater for residents to see. In the book, Johnson explores the colorful history and variety of these local films as they flourished in the early part of the 20th century.

“I was thrilled to learn a few weeks ago that my book was a finalist for the Richard M. Wall award,” Johnson stated. “Looking through the list of books that have previously received this award, I saw so many that influenced my own work and that have helped shape the evolving field of film and media studies. I’m deeply honored that the selection committee chose Main Street Movies to join this illustrious group.”

The winner of the award was Maya Montañez Smulker, for her book Liberating Hollywood: Women Directors and the Feminist Reform of 1970s American Cinema. 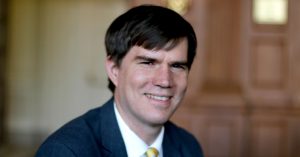