By Erik Maloney and Bailey Fernandez

Two of the four Distinguished Alumni honored on October 12 as part of UNC’s University Day celebration—Jill C. McCorkle and Robert D. Newman—are graduates of the Department of English & Comparative Literature.

Jill C. McCorkle, an acclaimed novelist and short story writer, received a BA in Creative Writing in 1980. The New York Times has chosen five of her works as Notable Books, and several of her short stories have been featured in Best American Short Stories. Her awards and honors include the New England Book Award, the North Carolina Award for Literature, and the Thomas Wolfe Prize. She has taught at UNC, Harvard, Tufts, and Brandeis, and is currently teaching creative writing at North Carolina State University. In 2018, she was inducted into the North Carolina Literary Hall of Fame.

Dr. Robert D. Newman, who earned his PhD from ECL, is president and director of the National Humanities Center. He has previously served as dean of humanities and professor of English at the University of Utah, and he has published six books and many articles on twentieth-century literature and culture, writing extensively on authors such as James Joyce and Thomas Pynchon. He is also the general editor of the “Cultural Frames, Framing Culture” series, published by the University of Virginia Press. 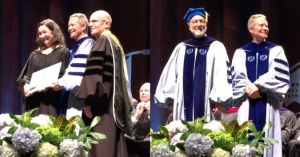