Isabella St. Onge, a double ECL and theatre major, demonstrates the perfect example of one student finding a way to connect two seemingly disengaged topics for the benefit of both fields. A lover of stories, whether acted out on the stage or articulated through the written word, Isabella found that by studying English, she can more accurately portray the characters she designs clothing for and gain insight into works she may have otherwise missed.

“Plays are very often bare-bones,” she admits, “and you have to figure out ok, what’s actually going on there, why does the character actually care about this, and how does that translate to what they’re going to be wearing. English has helped me interpret the texts to better create costumes for characters.”

She also discussed how her niche interest in costume design got her jump-started on an in-depth research project regarding Scottish Tartans for her class in Celtic literature, taught by Dr. Falzett, which has provided an excellent opportunity to connect the two fields even further.

Isabella’s semester-long project in this area has introduced her to a variety of social, political and cultural intersections in Scottish history through the study of Scottish traditional dress, and provided incredible insight into the time period that may have otherwise gone undiscovered. For example, she traced certain colored dyes being used in the 17th century Hebridean Islands all the way to their source in Mexico, over five thousand miles and a full ocean away.

“That was just kind of astounding and I got really excited about that,” she says, “just because you realize that people from the past aren’t as backwards or isolated or not connected as you might think they are. So that’s the main focus of my research right now.”

She admits the research can occasionally be overwhelming, but the key skill she’s learned from the process is to “focus, calm down, and cut out what’s unnecessary”, a mantra which perfectly encapsulates the sharp mindset she plans on bringing into her career after graduation.

As for advice for other humanities majors looking to start similar projects? “Go for it!” Isabella says, “You can join a community of research, especially here at UNC, that’s really welcoming and just exciting because there’s so much going on.” 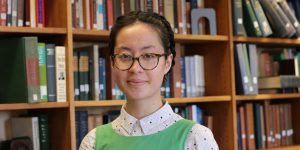