At the Dolby Theatre in Hollywood, UNC alumnus Andrew Carlberg held a trophy aloft in celebration on stage at the 91st annual Academy Awards. He had just accepted his Oscar for the short film he produced, Skin (2018), directed by Guy Nattiv, which won the Oscar for Best Live Action Short Film. “It was crazy. I’ve watched the Oscars every year since I was probably in third grade. It definitely was very surreal” Carlberg said, reflecting on the experience. “At the end of the day there were only 15 movie titles that have an Oscar associated with them this year and it’s the highest honor and the most exciting thing to be one of those.”

Skin is a short film that follows a young boy who has an innocent encounter with a black man at a supermarket. His white supremacist parents react to the exchange with racial violence, and the two families “find themselves in a clash with shocking consequences.” Carlberg has produced over thirty films, shorts, and television series since 2009, including two films and two shorts that are currently in production. His other best known work includes, The Bridge Partner (2015), Dirty Weekend (2015), and A Place in the Caribbean (2017). Carlberg says of his career, “I’m a producer with a capital P. I’m a very active, involved producer.” His job varies from project to project, “Sometimes it starts with finding the source material, it involves casting the project, raising money for the project, building the crew for the project… making sure the production happens.”

Carlberg credits his success in part to the skills he learn as an English Major at UNC. My English degree has served me better than I could ever imagine in the entertainment industry.”  A background in English helped Carlberg “not just in terms of understanding story, but being able to communicate and process knowledge.” He explained that the English major and literature more broadly gave him the “power to empathize with others” and “decipher the world.” Carlberg advises undergraduates, “College is teaching you how to think, and English does that extraordinarily well…. No matter where you’re looking for your career to go afterwards, it’s a major that [can] connect.” 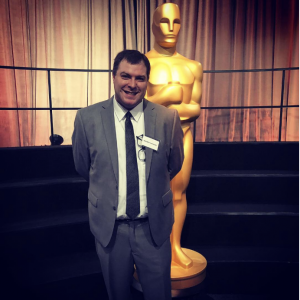 Keep an eye out for Carlberg’s upcoming productions, The Last Weekend in May, Date, Exile, and The Pleasure of Your Presence, and watch his Oscar-winning short film Skin here. 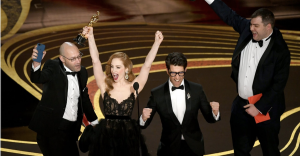