The University of Pittsburgh Press recently published Assistant Professor Candace Epps-Robertson’s book Resisting Brown: Race, Literacy, and Citizenship in the Heart of Virginia. Resisting Brown examines how African American community members in Prince Edward County, Virginia, responded to the county’s decision to close all public schools from 1959 to 1964 rather than desegregate as demanded by Brown v. Board of Education. In particular, Epps-Robertson explores the impact of the Prince Edward County Free School, a 1963 community project that provided education for Prince Edward children and young adults. Combining archival research with interviews of former Free School students, Resisting Brown analyzes the complexities of race, literacy, and citizenship in the American South. Professor Epps-Robertson answered some questions about the book’s origins, its implications, and how it has informed her current research.

Q: How did you begin this research project? What were its origins?

A: This project literally began with a phone call home to my mother while I was in grad school at Syracuse University. I was in a seminar class with Dr. Iswari Pandey and had been working on a project related to counter-storytelling. I was really interested in thinking about the ways that stories about education directly after Brown v. Board were told. I was also quite homesick for Virginia during this particular semester. I called my mom who was always eager to learn more about what I was doing, and we started to talk about Prince Edward. She literally asked me, “Why don’t you write about Prince Edward?” There was something really powerful and intimidating about the idea of writing about a series of events that were close to my family. I knew many of the stories about what happened when the schools closed from my family members, but I’d never taken an academic approach to trying to sort through the history and understand just how it happened and what kinds of responses were generated by the African American community.

Q: What is your personal connection to Prince Edward County?

A: My grandmother was born and raised there, and my mom spent the first 5 years of her life in the county. I grew up in Richmond, about 60 minutes northeast of Prince Edward. While I didn’t live in the county, I was raised by both my mom and grandma and their experiences certainly impacted me. I grew up with stories about Prince Edward. Some of my grandma’s stories were happy—trips to the candy shop, roller skating down hills, walking home from school with her sister, but other stories were quite dark. I didn’t know why, but there would be a shift in her demeanor when she’d talk about having to draw her feet on cardboard because she wasn’t allowed to try on shoes in the store. Or when she’d talk about the schools closing. As a kid, I knew there was pain in her stories. I just didn’t know how much.

Q: In researching and writing the book, what most surprised you?

A: Given the archival research I’d done, I had a particular understanding of how the Free School sought to define citizenship. There was a great deal of importance given to literacy as being the means by which students would be able to become active participants in the democracy. I thought that the interviewees would talk more about their experiences with the curriculum in this way, [but] I found that many of those I interviewed spoke more about influences and role models for citizenship that occurred outside of school. For many, it was the church or family members who were models for citizenship. So while the Free School made teaching for citizenship an explicit goal, former students found some of the most relevant models for being an engaged citizen outside of the institution.

Q: How does your book impact how we think about race, literacy, and citizenship today?

A: The public schools closed in Prince Edward County because some white folks in the community feared integration. The Free School was an institutional response to this act.

Given today’s climate, I can think of two implications. First, as we continue to witness racialized discourse about who counts as a citizen and what types of democratic participation are valued, as rhetoricians we have a responsibility to interrogate these instances.  I don’t think we can get through this particular moment in our country without sustained analysis of how these arguments are made, and the historical context from which they are rooted. For me, part of understanding how race and racism manifest today requires that we understand social histories of rhetoric because discourse shapes action. Second, I would say that the Free School case study demonstrates that while literacy is integral to helping communities face oppression, combating systemic racism requires a multipronged approach. The Free School had an important job, providing students with access to an education they were denied, but it did not eradicate the racism that many in the community still faced. While literacy and citizenship training are important, they can’t be viewed as the only means by which underrepresented communities can resist racial oppression.

Q: What are you currently working on?

A: I have two projects at the moment. The first is my way of digging deeper to understand how citizenship is taught in African American communities. The questions for this second book really come out of the interviews I did with Free School students. As I mentioned, many of the folks I interviewed talked about the spaces outside of school where they found role models and support for practicing engaged citizenship. I’m currently researching the role of Black churches during Reconstruction as a starting point for understanding how religious institutions have provided rhetorical educations tied to civic action for the African American community. I’m visiting archives now and am excited by the process of discovery that happens with archival work. My second project looks at the work of Black religious [leaders] and their efforts at addressing racism in the Catholic church.

Resisting Brown can be purchased through the University of Pittsburgh Press website. To learn more about Professor Epps-Robertson and her ongoing work, click here. 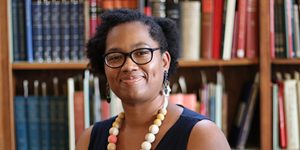