The day Victoria Wlosok received the call from her agent that she had gotten a two-book deal with Little, Brown, she was in shock. “I couldn’t believe I was actually going to be a published author, and I also couldn’t believe I was starting my career with a Big Five publisher while I was still a freshman in college. It was honestly one of the best days of my life.”

Wlosok’s upcoming novel, How to Find a Missing Girl, is a sapphic YA thriller that follows amateur teenage detective Iris Blackthorn as she investigates the disappearance of her cheerleader ex-girlfriend—who also happens to be the creator of a notorious local true-crime podcast about Iris’s missing older sister. Wlosok adds, “It’s full of mystery, probably more than a normal amount of Scooby-Doo references, and a lot of LGBTQ+ representation.”

Wlosok, a sophomore, is a prospective English and business administration double major. While her writing style has been influenced and formed through media outside of coursework, she has been impacted by many of her classes. “I think every class at UNC has shaped me in some way. In the spring semester of my freshman year…I took ENGL 117: Mystery Fiction with Professor Henry Veggian, where we studied several influential mystery fiction writers—Poe, Doyle, Mosley, Christie, and Pynchon among them—which made me appreciate mystery novels and their foundational role in shaping thrillers, which are what I write.”

This novel began as a part of the National Novel Writing Month (NaNoWriMo)—this challenge consists of writing 50,000 words within the month of November. Wlosok was introduced to this annual event through her high school English teacher in her freshman year, and she’s continued to participate every year ever since.

This sort of intense undertaking of course comes with difficulty. “The most challenging part about NaNoWriMo, at least for me, is finding the motivation to keep writing throughout the entire month. It’s easy to feel excited for a shiny new concept when you first start drafting, but keeping that momentum going for thirty days is much harder. But if you push through the slog, you’ll be rewarded with the first draft of a novel—and even if it’s not that great, you can keep polishing it until it is.”

As for the inspirations for her novel, Wlosok includes Holly Jackson’s and Karen McManus’s works, Sadie by Courtney Summers, the ABC TV series How to Get Away with Murder, the old-school Nancy Drew book series, and the sapphic video game Life is Strange.

As Wlosok writes, she also listens to music. Her playlist for How to Find a Missing Girl can be found here. Her own recommendations include the video game Night in the Woods, the album Dreamland by Glass Animals, and the show Gravity Falls.

When asking about book recommendations, she noted, “I highly encourage you to add Dear Wendy by Ann Zhao, Death by Society by Sierra Elmore, Kismat Connection by Ananya Devarajan, Caught in a Bad Fauxmance by Elle Gonzalez Rose, The Rosewood Hunt by Mackenzie Reed, and The Last Love Song by Kalie Holford to your TBRs. I also love the YA thriller You’re Next by Kylie Scachte—it’s clever, fast-paced, and absolutely wrenching to read.”

Wlosok is very hopeful that this novel resonates with readers of YA thrillers who do not typically see themselves represented in this genre. “There are traumatic themes within the novel, but it’s also humorous and joyful and has a big-hearted cast, so it’s not completely dark and gritty. Ultimately, it’s a book I’m very proud of, and I hope other teens can read it and feel like it was written for them, because it was.”

To find How to Find a Missing Girl once it releases, you can be notified by adding it to Goodreads or The Storygraph. Wlosok is also working on a standalone YA thriller which will release the year after HTFAMG—though information is not yet available, you can add it to Goodreads now. 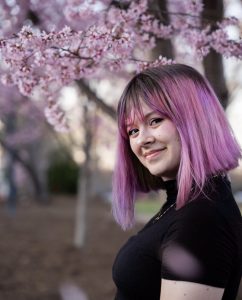