Congratulations to Josh Massey, an English and Comparative Literature and American Studies double major, on winning the prestigious Beinecke Scholarship. The scholarship gives up to $34,000 for graduate studies in the arts, humanities, and social sciences, and Josh plans to use the scholarship to pursue an M.A. in material culture.

Josh has done amazing work in both the ECL and American Studies departments. From researching and transcribing folk songs to writing poetry and interning abroad, he has had success in a wide variety of scholarly and artistic experiences. According to Josh: “My work in ECL has led me down many paths, from writing, recording, and performing songs in Florence Dore’s songwriting class, to writing on tombstone epitaphs in Janice Koelb’s class on Romanticism. My most interesting project examined the English singer-songwriter/pop star Kate Bush, and her relationships to both camp and to the Nietzschean ideal of self-stylization, written for Eric Downing’s class on aestheticism.”

In addition to his coursework, Josh conducted extensive research for a spoken-word poetry project. After receiving the Taylor Fellowship to fund his summer research, Josh transcribed and edited “nearly eighty spoken-word works” by Lonnie Holley into a collection that he plans to publish in collaboration with the artist and Professor Bernard Herman by 2022. Josh’s work on the collection, Wordsmithing, “led [him] to newfound interests in Holley’s art, as well as in poetics and material culture writ large.”

Josh’s interest in poetics comes from his work on Wordsmithing and his readings in literature and literary theory: “Learning how to read poetry was integral in the development of my interest in the poetics, and learning about language, literature, and ways of reading and writing were great influences on me as well.” While studying abroad in London, Josh says he “began to question the ways in which language defines our existence.” The questions he began asking himself about built environments led Josh to “begin writing prose and eventually poetry,” and even led Josh to self-publish a collection of poetry, A Year in the Woods and A Year in the Clouds.

Josh’s work on material culture in the American Studies department has led to remarkable opportunities at museums. Josh began working as a student guide at the Ackland Art Museum on UNC’s campus, and from there, his opportunities only grew: “My work at the Ackland led me to an internship at Whitechapel Gallery in London and led me to visit dozens of art museums across the United Kingdom and mainland Europe during my time abroad.” Josh is particularly interested in museum work because of the accessibility it provides: “The public-facing slant to my work is of great importance to me, and continues to define my work.”

For Josh, the Beinecke Scholarship has solidified his understanding of himself as an academic, artist, and professional: “Winning the Beinecke has given me confidence and pride, while also giving me a level-headed way of describing what I would like to do with my life.” Josh credits his aspirations to the opportunities his interdisciplinary work grants: “The interdisciplinary nature of American Studies combined with the endless subject matter of interest in ECL has given me the best of both worlds.” After completing his M.A. in material culture, Josh “aspire[s] to work at the intersection between academia and museum education.” 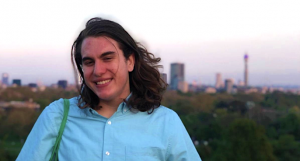