Danielle Kruchten, a double major in English and History, reveals how different majors play to each other’s strengths and can lay the fundamental groundwork for her future plans of attending law school.

The particular skills Danielle gained throughout her English courses, from reading literary authors and analyzing their arguments to exploring critical thought and honing in on her own writing skills, proved incredibly useful for her long term goal of becoming an attorney. English provided the optimal space to articulate her own arguments and practice the very skills she knew she would use in her later career.

“You need to know how to properly communicate with other people,” Danielle says, “and English is amazing for that. And then paired with the history major, it’s times two, so that’s great!”

For Danielle, English and history overlapped in many beneficial ways, and she couldn’t imagine completing one without the other. Both involved the same sense of analysis and critical thinking, but what really stood out to Danielle was the research involved in her English classes that strengthened her approach to historical studies. For example, she revealed that her ability to sift through massive amounts of published material in order to distill an argument actually found its root in the close readings and contextual research required of her English courses.

“History expects you to be able to research, pull outside sources, and incorporate them seamlessly,” Danielle explains as she discusses her choice to a pair the two majors together, “but it’s through the English major that I was able to really learn how to do it.”

The instruction in such skills will certainly prove themselves invaluable when the time comes for Danielle to complete her year-long research paper, which is required of all history majors in order to obtain their degree. After continually practicing research, analysis and critical thinking in all of her English courses, Danielle feels more than confident in tackling such a large project which will begin in the fall semester of this year.

That same investigative nature she discovered in her English studies and then applied to her history studies are, in Danielle’s eyes, crucial to her dream of attending law school to pursue a career in intellectual property rights.

“For law, pretty much all I’ll be doing is reading cases, analyzing, looking for precedence,” she says, “Asking, what do I need here? What can I use for this case? And right now in English, that’s pretty much what I’m doing, but between books or authors.”

“It’s all about analyzing and finding what you can do with what you have,” she continues. “it’s just amazing!”

Her interest in law and English merged seamlessly here at UNC with an experimental education class that directly correlated the two in an unprecedented manner. English 385, taught for the first time by Dr. Larson in the fall of 2018, involved the study of several landmark court cases and the literature that either inspired or were inspired by them. Reading each case as a narrative, and each narrative as a case, Danielle was exposed to the ways in which law has shaped social identities and cultures over the course of American history. The class culminated in participation in UNC’s research exposition at the end of the semester, which allowed each class member to discuss their own personal case research and final papers with a wider audience.

“It was so interesting because our job was to basically find that connection and how it’s still prevalent in today’s society,” Danielle explains. “We created giant posters that we then displayed at this expo and talked people through what we found between these cases and these plays. Then we also created this short little documentary movie clips to go along with it!”

The merging of all of her skill sets to create such a final research project just reinforced for Danielle how flexible the English major is, and how useful her studies there will be as she continues on her journey after graduation. 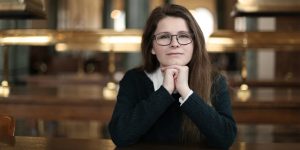