Deitelzweig is a recent graduate, pre-med English major, and Morehead-Cain Scholar from New Orleans, Louisiana. She chose to major in English while pursuing a pre-med track because, as she puts it, English and humanities classes often emphasize understanding “people as a whole.” Knowing she wanted to pursue medicine when she applied to college, she was struck when she learned about the Science, Medicine, and Literature concentration in the DOECL:

Reflecting on her time in the DOECL, Deitelzweig found one course particularly memorable: a class with Prof. Courtney Rivard on rhetoric and digital humanities. Deitelzweig remarked how different it was to complete a digital humanities research project in comparison to the research methods in her STEM courses, and moreover, how humorous she found it to feel like the sole representative of the humanities at the Celebration of Undergraduate Research, surrounded by all of her pre-med friends presenting in the sciences. However, Deitelzweig found the digital humanities research to be very rewarding, and that it offered a sense of agency and subjective decision-making that was absent in her STEM research:

“[It] was a really neat project. We had the opportunity to visit Wilson Library and look at archive data. I performed textual analysis on this data through Python coding, so I certainly learned a valuable hard skill. We collected metadata from a corpus of written life histories from a certain period of time and created metadata categories. The written histories were from a time period where racist terms were more commonly used, so there was a choice I had to make of ‘Okay—do we use language that was used at the time so that people in the future know to search for that, or do we use more modern, contemporary, sensitive terms?’ So that’s an example of a subjective choice that the researcher has to make.”

In addition to her experience as a student, Deitelzweig also had the opportunity to teach in the DOECL—she was awarded the opportunity to craft a C-START course with Prof. Bradley Hammer on the representation of illness in film, bridging her interest in both medicine and the humanities.

“It was a medical film course where we would watch contemporary films, like Silver Linings Playbook and Black Swan. And we would delve into whatever the medical disease was focused on in the movie analyze it as a class. It was a very discussion-based course where I would ask, ‘Was this accurately portrayed? How does this portrayal influence our understanding in America?’”

Between the mentorship she enjoyed while designing her course with Prof. Hammer and teaching the class itself, Deitelzweig says the C-START course was a “great experience:”

“The students were so bright. I was really impressed by everyone’s work…and even though it was just a one-credit pass-fail class, everyone really…put in the effort and was engaged.”

As she ends her time at the DOECL and at UNC, Deitelzweig has a busy summer and year ahead before attending medical school. In addition to volunteering at a camp for kids with physical disabilities, she will work clinical hours as a medical scribe at UNC Dermatology and start a job as a trip leader for an active travel company called Backroads.

Although Deitzelweig still awaits to hear when and where she’ll begin studying medicine, she plans to take what she’s learned from the DOECL forward with her through her medical career:

“The critical reasoning and analysis skills that I’ve gained throughout my time studying English are vitally important for analyzing a patient [and] looking at different modern research methods that we use to update our regimen of medications.” 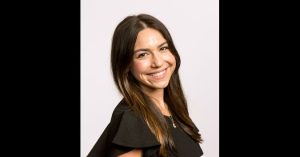