Andreamarie Efthymiou, an undergraduate who had originally placed herself on the pre-med track, quickly found herself more at home in the English and Comparative Literature Department than anywhere else.

Initially taking ECL classes as a way to balance out her STEM courses, Andreamarie realized how much she had loved comparative literature from the start, especially the way her studies there allowed her to explore a variety of cultures and literary traditions in relation to her own background.

“Being the daughter of immigrants, understanding the way that different cultures share ideas has always been of interest to me,” she says, “and eventually I ended up being so passionate about comparative literature that I let go of my other biomedical engineering major so I could have more of a liberal arts education.”

For Andreamarie, comparative literature not only spoke to her own experiences, but taught her a sense of understanding that she finds crucial in communicating in the modern world.

“I think the only way that we can really understand people is by understanding their culture and language,” she explains, “and in the world that we are living in now, I can’t think of anything more important than fostering discussion and understanding. Comparative Literature sets the perfect scene for that.”

Through her ECL coursework, Andreamarie developed her passion for research and even presented her findings at the American Comparative Literature Association (ACLA)’s annual conference. Her research generally focuses on the interactions between different ethnic groups and human rights, and she cites her time studying in the ECL department as one source of inspiration for the topic.

“Comparative Literature at UNC has given me the flexibility to take Spanish, Arabic, and French,” she says. “Between what I’m learning about these cultures, and what I know from my own Greek Cypriot heritage, I am amazed every day by how much human beings share, and how our foundational similarities can be found in literature. Through literature, we can also see what has historically divided us and try to remedy this.”

The ACLA is a three-day event held on Georgetown University campus that serves as a platform for scholars to actively engage in current comparative literature discussions. While there, Andreamarie presented her finished paper, which explores the glorification of the ‘other’ in Leo Tolstoy’s The Death of Ivan Ilyich and Franz Kafka’s The Metamorphosis, to a panel of undergraduate students and Georgetown professors who work in similar topics. The conference also afforded her the opportunity to broaden her own perspective and hear work from other researchers from around the country.

“I had never presented comparative literature research before, so the ACLA was really an amazing experience,” she says. “I really got to see Comparative Literature in action as a facilitator of understanding and cooperation.”

How did Andreamarie stumble on such a wonderful opportunity to share her work? Her presentation at the ACLA came out of an essay for Dr. Inger Brodey’s Travel and Identity Comparative Literature Class, which Dr. Brodey encouraged her to submit to the conference.

As a result, Andreamarie advises students who want to dive into research to simply speak with a professor about something that interests them, or to approach them with a question they have. “The best research topic is something that you are passionate about,” she says, “and a research idea could come from anywhere.”

Since presenting at the ACLA conference, Andreamarie has written her senior honors thesis, titled: “Loud Cypriot Women: Reimagining Cypriot Identity Through a Feminist Lens,” which won the ECL department’s Whitfield Prize for a senior honors thesis. Reflecting on her thesis, Andreamarie discusses how the process of thesis writing was at the intersection of the personal and the academic:

“To me, the point of writing a thesis was to devote time to exploring a question which I otherwise would never dedicate time towards answering, and for me, that question was a personal one. I allowed myself to ask ‘who am I?’ for the first time and actually develop an informed answer. My identity as a Cypriot woman is a complicated one, and having Cypriot women and their power and place in society by my thesis topic resulted in both academic and emotional enlightenments.” 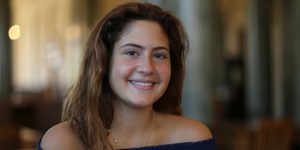