BLACK FOLK COULD FLY: Celebrating the Work of Randall Kenan

Our beloved colleague and friend Randall Kenan was one of the most influential writers in America. Hailing from a small town in Duplin County, Randall came to Carolina to find his voice as a writer. And find it, he did—Randall’s clear-eyed vision of the South set the tone for a generation of writers. This September, we honored that voice by celebrating the release of Black Folk Could Fly, a collection of his extraordinary essays. Touching on subjects ranging from the women who raised him to James Baldwin to the lowlands of eastern North Carolina, these essays reveal the tenderness and heart behind Randall’s powerful intellect. We continue to remember the life and work of a writer whose legacy will shape American letters for decades to come.

Relive the BLACK FOLK COULD FLY: Celebrating the Work of Randall Kenan event

On Sunday, September 11, we celebrated the life and work of Randall Kenan by celebrating the release of his posthumous collection Black Folk Could Fly. Carolina’s Voices of Praise Gospel Choir sang three powerful spirituals, including “If I Had Two Wings,” setting the tone that infused the occasion. Speakers gave the audience insights into the writer and his work: Alane Salierno Mason, Vice President and Executive Editor at W.W. Norton, who edited the collection; writer Tayari Jones, who wrote the preface to the collection; and E. Patrick Johnson, Dean of the School of Communication at Northwestern University. Their words gave depth and authority to Kenan’s influential legacy that has shaped our literary and cultural landscapes. Click below for a video of the event.

Randall Kenan: One of Us Forever

Randall Kenan was raised in Chinquapin, North Carolina, Down East, a town as he described it as “unincorporated and rural, largely tobacco fields and cornfields and hog farms.” But also a magical place. This town with a population of under 100 people became the centerpiece and inspiration for much of his writing, the fictional Tims Creek. Like Faulkner’s Yoknapatawpha, he found in the lives of the people living in his own “postage stamp of soil” worthy of the hopes, dreams, loves and loss all of us endure. Randall did not lack for accolades during the course of his writing life, but his last two volumes, If I Had Two Wings and Black Folk Could Fly, the book we’re celebrating today, have drawn extraordinary attention. Just look at the coveted cover of last week’s New York Times Sunday Book Review as an example. There’s a dazzling review and a drawing of Randall that distills his spirit: such a kind man, and a sage, a brilliant artist who left us long before his time.

When Randall came to UNC in 1980, he was more interested in physics than he was in fiction, more drawn to Star Trek than he was to similes. But classes with the legendary quartet of Max Steele, Doris Betts, Daphne Athas, and Bland Simpson set him on a radically different path. His personal transformation is a testament to the transformational power of Carolina, where there’s an open invitation to all comers to discover who you are. It was here Randall discovered he was a writer, but rest assured, he never lost his love for Star Trek.

Every year since 1993 the English Department and the Creative Writing Program have hosted writers of international distinction for a week of talks and readings and, most importantly, an engagement with our students. The writers it has brought to our campus compose a pantheon of some of our most important voices of our time, from Joan Didion to Tayari Jones. It’s the highlight of the school year and was a program Randall truly loved. To honor his legacy, the Randall Kenan Memorial Fund has been established to ensure this program never dies. I urge you to consider supporting it. He was instrumental in advocating for this program while he was alive, and through this fund he will continue to long into the future.

By any measure, Randall Kenan was a great man. Let’s make a promise to ourselves to keep his dream alive by preserving the program that will bear his name—the Randall Garrett Kenan Distinguished Visiting Writer Program, so that this generation and generations to come will recognize his indelible significance to UNC, to North Carolina, and to literature itself. And to think: he was once here among us, a student who roamed these very halls, who became an acclaimed professor, and the heart of our tremendous Program in Creative Writing. He is truly one of us forever, a child of Carolina, but a writer whose work belongs to the world 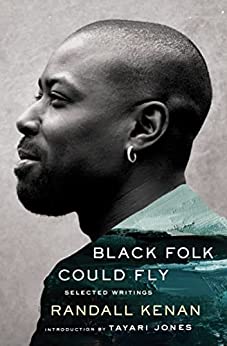 “A personal, social, and intellectual self-portrait of the beloved and enormously influential late Randall Kenan, a master of both fiction and nonfiction.

Virtuosic in his use of literary forms, nurtured and unbounded by his identities as a Black man, a gay man, an intellectual, and a Southerner, Randall Kenan was known for his groundbreaking fiction. Less visible were his extraordinary nonfiction essays, published as introductions to anthologies and in small journals, revealing countless facets of Kenan’s life and work.”

Praise for Black Folk Could Fly

Each essay in this collection is an education an illumination, a bridge from the past to the present, to the future, as long as Randall Kenan’s writing is read … The result is a book you sit with instead of rush through, lingering like you might with a friend when you just don’t want to say goodbye
—Alexander Chee, author of How to Write an Autobiographical Novel

Few writers are as secure in their various identities as [Kenan] was and as generous in celebrating the worlds of others. This collection is a tribute to one of the great writers in the African American tradition and assures his place in the canon.
—Henry Louis Gates Jr., author of The Black Church

A superb introduction to a writer deserving much greater recognition.

Other Books by Randall Kenan

The Cross of Redemption: The Uncollected Nonfiction of James Baldwin (2010)

Walking on Water: Black American Lives at the Turn of the Twenty-First Century (1999)

In honor of Randall Kenan’s extraordinary legacy as a writer, we have created the Randall Kenan Memorial Fund. Our hope is to establish a program in his name reflecting Randall’s strong commitment to the value of bringing fellow writers to campus to nurture Carolina’s literary culture and enrich its intellectual environment. Your support enables us to honor Randall’s belief in the power of words and writers to promote vital conversations and to change our world.