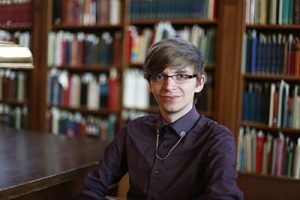 Khristian S. Smith studies late medieval and early modern literature, primarily drama placed in its religiopolitical and material contexts. His research interests include the histories of religion and emotion, occult knowledge, and literary representations of the Devil. His most recent publication places William Shakespeare’s Romeo and Juliet in its contemporary religious and scientific contexts by exploring the toxicological roles of night, crypts, and demons in the play. He has previously delivered papers on the Devil and humor in Ben Jonson’s The Devil is an Ass, Paracelsianism in Shakespeare’s A Midsummer Night’s Dream, and medieval theories of predestination in Geoffrey Chaucer’s Troilus and Criseyde. Smith’s current project interrogates the relationship between the reception of Calvinist doctrine and “horror” as an affect in sixteenth- and seventeenth-century tragedy, epic, and sermons.