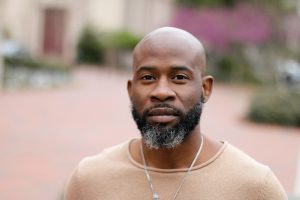 Eddie Moore is a passionate researcher and activist-teacher whose goals beyond teaching English curriculum include empowering students to think critically about the world they inhabit and the ways in which they might be actively in shaping it for greater diversity and inclusion.

Mr. Moore’s research interest include 20th Century African American Literature, Critical Theory and Cultural Studies (with specific emphasis on Masculinity Studies), Critical Race Studies, Gender and Sexuality Studies, and Medical Humanities. Primarily, his work is an interdisciplinary exploration of the utility of fictional representations of wellness outcomes among marginalized groups such as black queer men. Mr. Moore devotes a significant amount of his study to the work of James Baldwin, Samuel Delany, and other writers of black queer fiction. A crucial aim of his studies is to reclaim African American fiction from marginal positions among literary canons, as important theoretic and philosophical articulations of black and black queer experiences. These texts argue the connectedness of group body politics to politics of the national body.