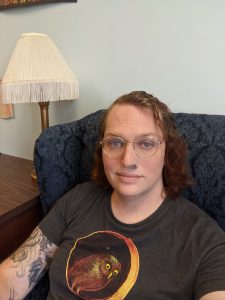 Toni DiNardo is a third year PhD student in the department of English and Comparative literature. A “medievalismist,” in the words of one colleague,” Toni’s work is predominantly concerned with the reception of medieval thought and perceptions of the Middle Ages as they have been mediated in modern genre fantasy. In particular, they explore the ways in which various audiences attempt to recuperate the Middle Ages through fantasy in order to construct and sustain identities, from queer rehabilitation of the medieval to white nationalist idealization of the Middle Ages as a putative ethno-nationalist paradise. They are also interested in the subjective experience – particularly among queer players – of the tabletop fantasy role-playing game. Other interests include the role of sexuality in Jacobean historiography, the queerness of faith in Donne’s ouevre, and anything to do with Margery Kempe.