Grad Interest: History of the Book

As a PhD student at UNC-Chapel Hill, Rachel studies British Victorian literature. Specifically, she is interested in ruins, material culture, and imperialism in the Victorian era, interests which were shaped by her studies in literary tourism and heritage in her MLIS degree. She plans to expand her studies in these topics by exploring print media and culture, industrialization, commodity culture, memory, and nostalgia in nineteenth-century Britain. 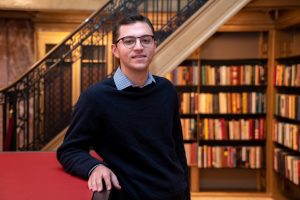 Tim Gress is a PhD student and Graduate Teaching Fellow in the department of English & Comparative Literature. His research focuses primarily on the literary and cultural history of Britain during the 19th century, especially as it relates to the history of the book. Other interests include lesser-known woman writers of the late-Romantic and early-Victorian periods, the history and development of the novel in English, descriptive bibliography, and book collecting. Tim also works as a Graduate Assistant in the Rare Book Collection at Wilson Special Collections Library. 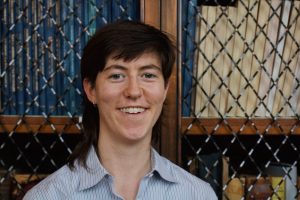 Isabel (they/them) is a second-year PhD student at the University of North Carolina. Their research broadly focuses on the intersections between language, textual culture, and queer theory in medieval literature. Medieval theories of language and rhetoric inform their investigation, alongside structuralist and post-structuralist criticism. Ambiguous words, semiology, and narratives concerning sex change are of particular interest to their research.

Isabel’s reading of queerness in medieval literature is twofold: they seek to locate queer instances in both didactic religious texts, such as the trans saints in medieval hagiography, and in secular narratives like the 13th century Le Roman de Silence. In both secular and religious frameworks, Isabel is concerned with how language informs structures of sexuality and gender and how these structures are often unsettled and displaced through language. In their reading of queerness in medieval texts, Isabel desires to experiment with how we recognize and interpret ‘queerness’ not as a fixed identity, but as acts, events, and performances in dialogue with identity-formation.

They are currently working on two projects: one entitled ‘I kan nat glose’: Queering Illegible Signification in Chaucer’s The Merchant’s Tale,’ which analyzes the infamous pear tree sex scene in Chaucer’s The Merchant’s Tale as a culmination of unintelligible semiotic exchanges of letters and of sexual organs, and the other, “Needle as Queer Instrument of Authorship in Chrétien de Troyes Yvain,” which considers the implications of the textile worker as auctor. Elisabeth studies 19th century American literature and medicine, focusing on how changing theories of mental illness and its treatment were encoded in congregate care institutions over the course of the century. Her research, which draws on a varied archive of patient memoirs, journalistic exposes, and fictional depictions of congregate care, investigates entanglements of race, gender, and disability in questions of mental healthcare. Erica studies women’s literature from the Romantic era and the American Civil War with a focus on infrastructure, the history of the book, memory and trauma studies, and intellectual history.