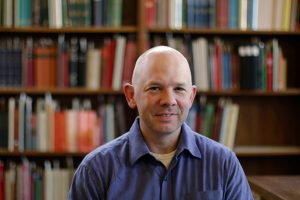 Søren G. Palmer’s work has appeared in Barely South Review, Ecotone, Huffington Post, North American Review and been shortlisted for the Flannery O’Connor Award for Short Fiction.  He holds an MTS from Vanderbilt Divinity School, an MFA in Creative Writing from Arizona State and a PhD in English and Comparative Literature from the University of Cincinnati.  He lives in Durham with his wife and three dogs.