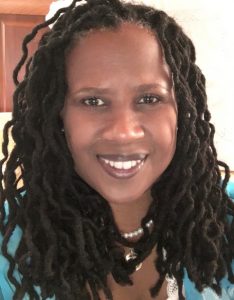 Rebecka Rutledge Fisher is an associate professor of African American literature, Black critical theory, and comparative literature in the department of English and comparative literature at UNC-Chapel Hill. She was selected as the Fall 2020 Johnson Fellow at UNC’s Institute for Arts and Humanities, and as a 2020-2021 Du Bois-Mellon Fellow at U Mass’s W.E.B. Du Bois Center. She is presently finalizing a book-length study, Understanding Natasha Trethewey, forthcoming in 2021 from the University of South Carolina Press. Her Johnson and Du Bois-Mellon funded book project is titled The Thinker as Poet: The Poetry and Poetics of W.E.B. Du Bois. Her first book, Habitations of the Veil: Metaphor and the Poetics of Black Being in African American Literature, was published by SUNY in 2014.