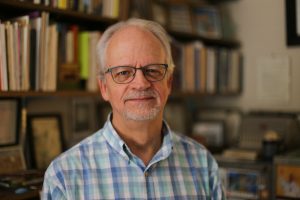 A native of Asheville, Michael McFee ’76 has taught in the Creative Writing Program at UNC-Chapel Hill since 1990. He is the author of eleven books of poetry—including five published by Carnegie Mellon University Press: We Were Once Here, That Was Oasis, Shinemaster, Earthly, and Colander—and two collections of essays, Appointed Rounds: Essays (Mercer University Press) and The Napkin Manuscripts: Selected Essays and an Interview (University of Tennessee Press). He has received the James Still Award for Writing about the Appalachian South, from the Fellowship of Southern Writers, and the Thomas Wolfe Memorial Literary Award from the Western North Carolina Historical Association.