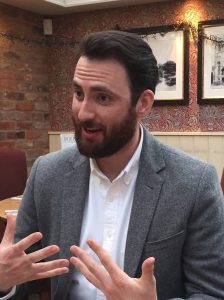 Mike is an early modernist at work on his current book project, The Island Nation and Its Discontents: Transnationalism in English Renaissance Literature. Focusing on Shakespeare’s France and Scotland, Spenser’s Ireland, Greville’s Low Countries, and Milton’s Italy, this project reassesses the significance of certain key early modern internationalisms—humanist, Protestant, republican, and poetic—in the literary construction of “England” by exploring how English authors challenged the archetype of the “elect island nation” through transnational and participatory models of nationhood. Portions of this study have appeared as articles in Shakespeare Quarterly and Sidney Journal, and a separate essay on Milton’s Lycidas has been published in Studies in Philology.