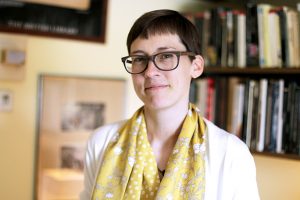 Kimberly J. Stern earned her Ph.D. from Princeton University, with a special focus on Victorian literature and culture. Although much of her research engages with the history and politics of intellectual culture, Stern’s teaching and scholarly interests include several broader fields of inquiry, including women’s writing, the novel, aesthetic theory, drama, and the British fin de siècle.

Stern was the recipient of a Humanities Writ Large fellowship at Duke University in 2014. During her time at Duke, she completed a critical edition of Oscar Wilde’s controversial play Salome (Broadview Press, 2015).

Stern’s first monograph, The Social Life of Criticism: Gender, Critical Writing, and the Politics of Belonging,  was published by University of Michigan Press in 2016. Tracing the work of aspiring female critics from the eighteenth century to the end of the Victorian period, Stern contends that a sustained engagement with gendered forms of sociability shaped the critical work of women writers (including Anna Jameson, George Eliot, Vernon Lee, and others). As the book explores representations of critical communities—from the Spectator Club and the “tavern sages” to the “antisocial” impulses of the 1890s—it argues that the history of criticism is inextricable from the history of gender.

In 2019, Stern published an intellectual biography, Oscar Wilde: A Literary Life with Palgrave. The following year,  she completed a critical edition of Thomas Carlyle’s Sartor Resartus through the COVE Collective (http://covecollective.org). Stern serves as co-editor of the interdisciplinary journal Nineteenth Century Studies.

Stern is currently at work on a book, which  places late nineteenth-century writers like Oscar Wilde, John Ruskin, Henry James, and others in dialogue with important educational reformers of the nineteenth century. Inspired by her work in the classroom, this project seeks to uncover how late Victorian thinkers anticipated and might help to enrich contemporary debates about the cultural value of humanistic study.