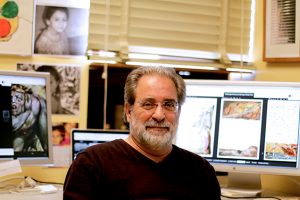 I am co-editor/creator with Robert Essick and Morris Eaves of The William Blake Archive <http://blakearchive.org>, a hypermedia digital database of Blake’s poetry and art based on over 7000 high-resolution (300 dpi) images drawn from Blake’s illuminated books, paintings, drawings, manuscripts, and engravings. The site is made possible by the University of North Carolina at Chapel Hill with the University of Rochester, the continuing support of the Library of Congress and private foundations, and the cooperation of an international array of libraries and museums that have generously given us permission to reproduce works from their collections. Past support includes the Institute for Advanced Technology in the Humanities at UVa, the Getty Grant Program, the Paul Mellon Centre for Studies in British Art, and NEH.

The Archive, with its main offices in UNC’s Department of English and Comparative Literature, draws its editorial assistants from the department’s graduate program.  Its structure and rationale grew out of the editors’ earlier projects for the William Blake Trust (vols. 3 and 5 of William Blake’s Illuminated Books, Tate Gallery/Princeton U. P., 1993) and my Blake and the Idea of the Book (Princeton U. P., 1993).  Conceived and designed in 1993–95, launched in 1996, and completely redesigned with new tools and capacities in 2016 and 2017, the Archive is an international public resource that provides unified access to major works of visual and literary art that are highly disparate, widely dispersed, and often severely restricted as a result of their value, rarity, and extreme fragility. The Archive, which, to date, has published 157 fully searchable and scalable digital editions of Blake’s works in all genres and three digital exhibitions, became the first digital scholarly edition to receive the Modern Language Association’s (MLA) Prize for a Distinguished Scholarly Edition (2003) and the first to receive its Approved Edition seal (2005). These awards legitimized our methodology and the use of computers in the editing of texts and images and paved the way for “humanities computing” to become “digital humanities” (2006).

The Blake Archive is possibly the most documented of all digital humanities projects. According to Saree Makdisi, “the online Blake Archive . . . has completely transformed the way Blake is now read, studied, and taught” (17).[1] According to Kate Hayles, “It is no exaggeration to say that The William Blake Archive establishes the gold standard for literary Web sites” [263-64].[2] According to Susan Schreibman: “The archive’s adherence to strict digitization standards, to capturing the fidelity of the original artifacts, and to creating a vocabulary that would allow unprecedented access to the complexity of the rich visual vocabulary that Blake employed has set the gold standard for image-based electronic editions [par. 21].[3] These are among the many comments made by reviewers and users of the Archive—and all before our transformative redesign launched in December 2016. Since then, Andrew Webster has reported: “First created and conceived over 20 years ago, the William Blake Archive set a standard for the digital humanities.  It’s now broken another mold….  The combination of text and illustration on a digital page never looked so polished and beautiful as it does on the newly refurbished website….”[4]

In 2021, I published William Blake’s Printed Paintings: Methods, Origins, Meanings (Paul Mellon Centre for the Study of British Art, Yale University Press, 2021), which examines Blake’s masterworks, the twelve large color prints of 1795 and their 29 extant impressions. In 2019, I published a 45,000 word essay on the posthumous copies of illuminated books printed by Catherine Blake and Frederick Tatham as the Fall issue of Blake / An Illustrated Quarterly. For my seminars in Revolutions in Romantic Art and Literature, I continue to examine the development of watercolor painting, print technology, and lyrical poetry in the Romantic period, focusing on works by major and minor figures, including Blake, Wordsworth, Coleridge, Turner, Constable, A. and J. R. Cozens, and William Gilpin.