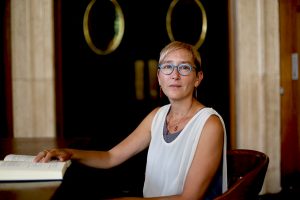 I am what the sixteenth-century polymath Gabriel Harvey would call a “curious universal scholler” of Renaissance culture, with interests ranging from natural philosophy and the occult tradition to the reception of classical literature and philosophy to the history of books and readers, comparative epic, comedy and humor, automata, and miniature things. I have a particular fondness for erudite commentaries, encyclopedias, eclectically annotated early modern books, cabinets of curiosities, and anything concerning insects or flatulence. I’ve published on some of the most canonical writers of the period — Erasmus, Spenser, Milton, even Shakespeare — but also on more unusual topics such as Elizabethan flea circuses. My two ongoing projects are an edition of Thomas Browne’s Pseudodoxia Epidemica (Oxford UP), a kind of Renaissance ‘mythbusters’ that exposes false beliefs about subjects ranging from magnetism to pygmies, and the first-ever biography of the fascinating and difficult George Chapman, a poet, playwright, and translator. I teach a wide range of courses on England and Europe in the sixteenth and seventeenth centuries as well as on classical literature and its reception; I actively advise doctoral students and some of my recent graduate seminars have been “Science and Poetry in the Renaissance,” “Humanism and the Human in Renaissance Literature and Art,” “English Renaissance Literature and the Classics,” and “Humanism and the Problems of Interpretation.” In addition to my position in English and Comparative Literature, I am Director of the Medieval and Early Modern Studies Program, and an Affiliated Professor in Classics and Romance Studies.

Homer and the Question of Strife from Erasmus to Hobbes (Toronto: University of Toronto Press, 2015).

My research has been supported from the Folger Shakespeare Library (O.B. Hardison long-term fellow, 2017-18), the National Endowment of the Humanities (N.E.H. Newberry Library – Herzog August Bibliothek Fellowship, 2014-15), the Henry E. Huntington Library, the John Carter Brown Library, and UNC’s Institute of the Arts and Humanities.