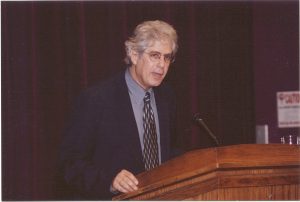 I am interested in the development of fiction from the late seventeenth century into the middle of the nineteenth-century and my most recent book applies classic sociological theory to fiction. I have taught a lot of Jane Austen courses of late but have also taught a Dickens first year seminar and am developing another FYS course on comic film. And I spend at least half of my time in Steele building working on General Education matters.

2003 – Johnston Award for Excellence in Teaching