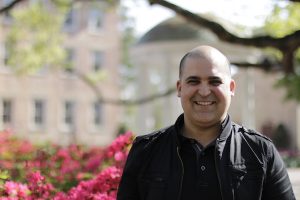 Guillermo Rodríguez-Romaguera is a Spanish peninsular film scholar and filmmaker from Puerto Rico. He has a Ph.D. in Comparative Studies in Literature and Culture and an M.F.A. in Film and Television Production from the University of Southern California as well as an A.B. in Comparative Literature and Latin American Studies from Princeton University. His work appears in Studies in European Cinema, Cervantes: Bulletin of the Cervantes Society of America and the Bulletin of Spanish Visual Studies. His upcoming book Mirrors to the Unconscious: Spanish Meta-Art and Contemporary Cinema examines instances of duality and self-reflexivity in films that appear to project on screen what the viewer is subconsciously thinking. His current project The Fluid Gaze: Transgender Visual Pleasure in Spanish Horror Cinema examines Spanish horror films before, during and after “la Transición española” through an intersection of queer and trans theory to re-think the horror genre as the site of a complex intermingling of gender and sexual identities for its Spanish audience.

Guillermo is also a film director, screenwriter and editor. He wrote, produced and directed an emotional thriller entitled The Shadows (2007) and produced and edited the feature film Sweet Thing (2008), a coming-of-age tale of two young women set in Seattle. He has worked as an editor for DirecTV, NBC and CBS as well as editing numerous feature films, documentaries and TV series such as The History Channel’s Gangland.