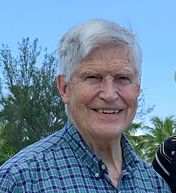 I retired in 2002 so that my wife, Pat, and I could serve a full-time mission for The Church of Jesus Christ of Latter-day Saints under her brother’s direction in Ireland.  Subsequently, we served an additional five full-time missions together.  We now live permanently in Salt Lake City, Utah.  In March 2020, Pat and I celebrated our 60th wedding anniversary together with our three children and their spouses in Tahiti.