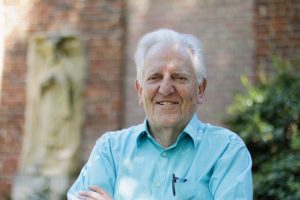 Christopher Armitage’s teaching philosophy is that in seeking to inspire students, the teacher’s being inspired by his or her subject is a desirable prerequisite, and he considers himself fortunate that his interests in English, American, and Canadian literature aligns with his degrees from England, Canada, and the United States. His international education convinced him of the consciousness-widening value of studying abroad, so he began taking UNC students and alumni on Study Abroad programs in 1970.

He has been teaching at UNC since 1967 and has won numerous teaching awards in the following decades.

Check out the recent article about his Shakespeare program: https://www.seh.ox.ac.uk/news/stage-page-and-college-unc-chapel-hill-students-spend-july-at-the-hall-studying-shakespeare