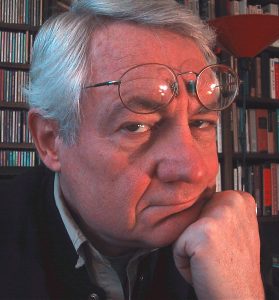 Appreciative laughter spilled from Carroll Hall on the evening of October 6 as humorist and writer Roy Blount Jr. spoke to a standing-room-only crowd. Blount was receiving the 2009 Thomas Wolfe Prize and delivering the annual Thomas Wolfe Lecture with his characteristic art and wit. Whether audience members knew him as author of the 21 books he’s written in the last 25 years or as a panelist on NPR’s Wait, Wait . . . Don’t Tell Me!, they were ready to listen to Blount speak in his southern accent—still intact after years of northward living. Arriving with a strong fan base, he left Chapel Hill with an even larger one.

The Department was pleased to celebrate Blount’s literary accomplishments while honoring the memory of UNC’s most famous literary alumnus, Thomas Wolfe (1920), author of Look Homeward, Angel (1929). The medal that department chair Beverly Taylor placed around Blount’s neck bears these words from Wolfe’s novel: “. . . a stone, a leaf, an unfound door . . . ,” the same words that appear on the Thomas Wolfe memorial beside Greenlaw. Aptly, Joseph Flora, faculty member and past president of the Thomas Wolfe Society, brought greetings to the audience from that group.

Michael McFee, director of Creative Writing at Carolina, introduced Blount as “the best kind of working writer, what in earlier times we called “‘a man of letters,’ ‘a professional writer engaged in literary pursuits’ who excels at many different kinds of writing.” Indeed, Blount’s publications cover a broad range, including essays (Crackers, 1982), a novel (First Hubby, 1991), a memoir (Be Sweet, 1998), light verse (Soupsongs & Websters Ark, 1998), a biography (Robert E. Lee, 2003), and an anthology (Roy Blount’s Book of Southern Humor, 1994). In addition, his essays, articles, and stories have appeared in over 150 different periodicals, among them The New Yorker, The Atlantic Monthly, The Southern Review, Sports Illustrated, and his current column in Garden and Gun. Long Time Leaving: Dispatches from Up South (2007) is a collection of his columns from The Oxford American. Recognizing his contributions, The Fellowship of Southern Writers elected him to membership.

Blount’s contributions to the literary world extend beyond his writing. He serves on the American Heritage Dictionary usage panel, and as president of the Author’s Guild he was centrally engaged in the Authors Guild v. Google lawsuit. He has also been vocal about the rights of authors in audio productions of their works

During the course of his address, Blount read from his most recent publication, Alphabet Juice (2008). Blount’s long-time friend, creative writing faculty member and poet James Seay, has commented upon the richness of his language in general, and in this work in particular. Citing a passage from Alphabet Juice, Seay describes Blount’s writing as “the words of a humorist with poetry in him, one who understands the deepest registers of language.” McFee concurs: “As a poet, what I really love about Roy Blount Jr. is his love for words, his keen ear and quick tongue, his voracious appetite for the way words sound and for what they really mean.”

Meeting with Carolina Creative Writing students earlier in the day, Blount offered insights into his writing process and his love of language. Students valued the opportunity to talk with our Thomas Wolfe Prize recipient, a professional writer with experience publishing in multiple genres.

Though Blount currently lives in Massachusetts, his southern roots were deeply formed by his years growing up in Georgia and attending Vanderbilt University. He received his M.A. from Harvard. He reports that he is currently working on a sequel to Alphabet Juice to be titled Alphabetter Juice, and that Hail, Hail, Euphoria!—The Marx Brothers in Duck Soup is due out in October of this year.

The Department continues to be grateful to Alumnus Ben Jones, who endowed the prize money and medals for The Thomas Wolfe Prize and Lecture, and to the Morgan Writer-in-Residence Program, which helped sponsor the event. The annual occasion honors an author who has made a significant contribution to writing in the humanities and whose work befits the ambition and scope shown by that of Thomas Wolfe. Previous recipients include Tom Wolfe, Larry Brown, Elizabeth Spencer, Pat Conroy, Ellen Gilchrist, George Garrett, Fred Chappell, Reynolds Price, and Robert Morgan.