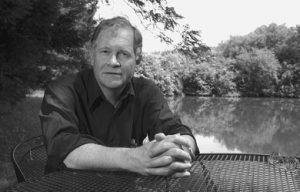 Carolina honored two of its literary alumni simultaneously this fall when writer Robert Morgan (B.A. 1965; honorary degree 2006) returned to Chapel Hill to receive the 2008 Thomas Wolfe Prize, an award honoring Wolfe (UNC 1920), author of Look Homeward Angel. On October 2, Morgan accepted the award and delivered the 2008 Thomas Wolfe Lecture to an enthusiastic crowd of admirers in Carroll Hall. In his comments, he discussed both Wolfe’s legacy and his own recent work, aptly tying Carolina’s literary past to the present.

Morgan, a prolific and successful writer, merits the evening’s accolades showered upon him. Freshman Thomas Wolfe Scholar Jenna Hall (Class of 2012) of China Grove, N. C., presented Morgan with the Thomas Wolfe Medal. Michael McFee, poet, UNC’s Creative Writing Program, then had the privilege of introducing his long-time friend. Citing Morgan’s publication to date of 23 books, including poetry, novels, short stories, nonfiction, and biography, McFee described these works as “an outpouring of vivid original satisfying work centered on Bob’s native mountains, in particular the vanishing Appalachia of his ancestors.” He observed that “nobody writes with more precision and imagination about those people’s daily lives, their plows and their slop buckets, their childbirthing and their churchgoing, their family and their community.”

Morgan’s roots in the Carolina writing community are deep. As an undergraduate in the early 1960s, he studied writing with Jesse Rehder and was fiction editor of the Carolina Quarterly. While visiting in October, Morgan talked with current Creative Writing students about the writing process and enjoyed being interviewed by the Quarterly. Both the circular experience and the timeline are noteworthy: Morgan graduated 45 years after Wolfe; many of the students he spoke with will postdate his graduation by 45 years. The program’s remarkable past and present continue to mentor and encourage young writers and to strengthen Carolina’s literary community. Programs such as the Thomas Wolfe Prize and Lecture enable this rich process.

Morgan has shared his Carolina legacy with points further north, teaching at Cornell since 1971, but maintaining close ties with North Carolina. His professional honors include the North Carolina Award for Literature, the Southern Book Critics Circle Award, and Guggenheim and NEA fellowships. When he received an Academy Award in Literature from the American Academy of Arts and Letters, the citation read: “A storyteller with an eye for detail, an impeccable ear for language, a devotion to craft, and a passion for truth, Robert Morgan has written poetry and fiction of great distinction for many years.”

Morgan’s poetry collections include Red Owl (1972), Groundwork (1979), At the Edge of the Orchard Country (1987), and Sigodlin (1990), which McFee desribes as “remarkable for their dazzling images, their highly distinctive diction and subject matter, and their ability to make something happen in every line.” Among his prose works are the short story collections The Balm of Gilead Tree: New and Selected Stories (1999) and the novels The Truest Pleasure (1995) and Brave Enemies (2003). His 1999 novel Gap Creek became a best-seller and selection of Oprah’s Book Club. During his lecture, Morgan read from his recent biography of Daniel Boone (Boone: A Biography, 2007), which critics have praised as “a riveting account of the real Boone.”

Alumnus Ben Jones has endowed the prize money and medals for The Thomas Wolfe Prize and Lecture; the Morgan Writer-in-Residence Program and the Department of English and Comparative Literature sponsor the events. The annual occasion honors an author who has made a significant contribution to writing in the humanities and whose work befits the ambition and scope shown by that of Thomas Wolfe. Previous recipients include Tom Wolfe, Larry Brown, Elizabeth Spencer, Pat Conroy, Ellen Gilchrist, George Garrett, Fred Chappell, and Reynolds Price.