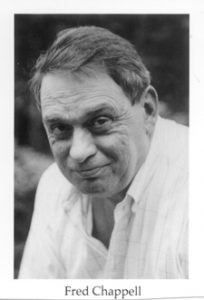 Author of: Midquest
I Am One of You Forever

“Anybody who knows anything about Southern writing knows that Fred Chappell is our resident genius, our shining light, the one truly great writer we have among us.”
–Author Lee Smith

Growing up in the North Carolina mountains near Asheville, writer Fred Chappell, working to find his own literary voice, resisted association with the area’s literary legend, Thomas Wolfe. Wolfe, he said, had achieved the “status of folklore.” However, on October 6, Chappell graciously accepted the 2005 Thomas Wolfe Prize, which honors his impressive body of work, including seventeen collections of poetry, eight novels, two books of short fiction, two books of essays, and a multi-genre reader. Following the presentation, Chappell delivered the annual Thomas Wolfe Lecture to an appreciative capacity crowd in the Morehead Banquet Hall on campus. His remarks were characterized by his trademark rich prose, which distills folksiness, intellectualism, humor, and piercing insights into language and observations that delight and startle. 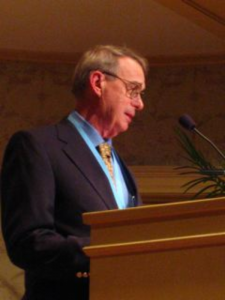 Writer Marianne Ginger, Associate Professor of Creative Writing and a former student of Chappell’s, introduced him to the audience. She described him as “a Man of Letters” who is “possessed, like so many of his wonderful characters, by an inexhaustible imagination that is by turns profound, playful, exultant, profane, awestruck, irreverent, elegiac, witty, dangerous, tender . . . .” Chappell’s imagination clearly caught the imagination of those gathered to honor simultaneously two literary giants from our North Carolina mountains.

While at Carolina, Chappell also met with creative writing students. Following a general discussion of the writing process, the consummate teacher turned the session into a sharing and critiquing of students’ poems—an enviable opportunity for young writers.

Chappell is the first native North Carolinian to receive the award that honors UNC’s most famous literary alumnus Thomas Wolfe (1920), author of Look Homeward, Angel. Chappell’s works include his masterpiece Midquest (1984), a four-book verse novel, and the tetralogy of Kirkman novels from I Am One of Your Forever (1985) through Look Back All the Green Valley (1999). Besides teaching writing and literature at UNC-Greensboro from 1964 to 2004, Chappell served as state Poet Laureate from 1997-2002.

Alumnus Ben Jones has endowed the prize money and medals for The Thomas Wolfe Prize and Lecture; the Morgan Writer-in-Residence Program and the Department of English sponsor the events. The annual occasion honors an author who has made a significant contribution to writing in the humanities and whose work befits the ambition and scope shown by that of Thomas Wolfe. Previous recipients include Tom Wolfe, Larry Brown, Elizabeth Spencer, Pat Conroy, and Ellen Gilchrist.