Please join us in welcoming Dr. Steven Gotzler to his new position as Assistant Director to the Digital and Literacy Communications Lab! Professor Gotzler received his B.A. in American Studies from the University of California at Santa Cruz, and both his M.A. and Ph.D. in Literary and Cultural Studies from Carnegie Mellon University.

His research explores the intersections of work discourse, intellectual culture, and critical theories of race, gender, and the environment. He also has related interests in the digital humanities and critical game studies.

Professor Gotzler is currently working on several projects. He is co-authoring an essay with Roopika Risam (Dartmouth College) and Vineeta Singh (Virginia Commonwealth University) coming out in Ethnic Studies Review –the essay inaugurates a distributed special issue on “Abolitionist Pedagogies and Pedagogical Labor” that will be published in ESR over the next 2 years.

He is also finishing up a chapter for an edited volume on The Idea of the Lumpenproletariat. His chapter reads 3 contemporary films (Roma, Sorry to Bother You, and Parasite) through the theory of surplus population that Marx develops in Capital Vol.1 as indicative of the ‘regular irregularity’ that characterizes economic life for the global working-class in the 21st century.

Professor Gotzler co-hosts a podcast with Professor Jordan Tynes of Wellesley College about the cultural relevance of table-top gaming called Subject Matter: Table Top: “This month my co-host and I interviewed a local game designer here in Durham, Omari Akil, and we’ll also be sitting down with Savannah Mandel, a space anthropologist at Virginia Tech, to play Terraforming Mars.”

This January, Professor Gotzler will also be traveling to MLA in San Francisco to present on research in minimal computing and digital editing that he conducted for a project called MARXdown.

One of the areas that drew Professor Gotzler to UNC was “the dynamism of the writing program, and the opportunity to build and execute assignments with students that leverage digital tools and multimedia to develop core rhetorical competencies.”

In relation to this, he pointed to being drawn to the opportunity to collaborate with the Gaming Initiative. He adds: “I would just like to emphasize how thrilled I am to be a part of the Carolina community, and especially here in the department of English & Comparative Literature, and that I look forward to becoming a more established member of that community!”

A fun fact about Professor Gotzler is that he grew up in a remote part of California in the Indian Wells Valley, a region of the Mojave Desert just east of the Sierra Nevadas and near to Death Valley National Park. 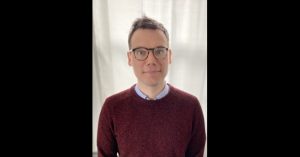