When Nollert was elected as GPSG President in February, his platform centered on “building a foundation to tackle both long-standing systemic issues and smaller problems.” These concerns included the increase of the stipends of graduate students, concerns over health insurance, and state advocacy efforts.

Nollert is a fourth year English PhD student studying the connection between literary genres (such as poetry and drama) and political movements (like republicanism) in the British Isles between 1550 and 1700. Nollert previously served as president of the Comparative Literature and English Graduate Student organization, CoLEAGS. He also joined the Cabinet of GPSG under the Swamy Administration to serve as Director of Employment Affairs.

In his interview with The Daily Tar Heel, he detailed how he decided on his platform:

“I developed a platform by talking to people, finding out what they were interested in…Trying to find a way to build that sense of community is something that has emerged from this campaign process as a real priority.”

Throughout the fall semester, GPSG has advocated for a pay increase for paid graduate students. GPSG is advocating for $25,000 minimum stipend for PhD students and a $16,000 minimum for MA students. Through their research, they found that UNC’s own estimated 9-month Cost of Attendance for grad students after factoring out tuition, health insurance, and fees is approximately $25,000.

According to Nollert, the GPSG has identified three key reasons for the need in raising the stipend pay: to match rising inflation rates, to bolster the competitiveness of the program, and to create equity towards students who do not have additional, external financial support. Since 2013, inflation has risen by 27.3%. Over the same period, the minimum stipend has only increased 12% for PhD students and 17% for MA students. A low stipend makes it harder for students to afford graduate school on their own, and low pay makes it harder for people without intergenerational wealth or fiscally supportive partners to get a graduate degree from UNC.

In September, Nollert went before the UNC Board of Trustees to advocate for the support of the stipend increase. According to the GPSG website, earlier this November, Provost Chris Clemens announced his hope for the future implementation of “the biggest one-time increase to the graduate student minimum stipend in the history of this institution.” At the November 4th faculty council meeting, the council unanimously passed a resolution to “support an increase in minimum stipends and a plan to provide regular pay increases for graduate students.”

We look forward to seeing what other work Nollert achieves as GSPG president and celebrate his advocacy for graduate students! 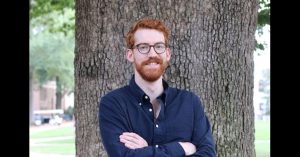