This fall, the Department of English and Comparative Literature welcomes fifteen new PhD candidates! The department is very excited to introduce this special cohort, and their wide-ranging research interests.

Chris Catanese works with British and transatlantic literature of the eighteenth century and Romantic era, with an emphasis on poetry and genre. Catanese is particularly interested in evolving systems of land use, working-class writers and rural issues, commons and enclosures, and economic and agricultural history. Catanese has published on Samuel Johnson, antiquarianism, and the mass reading public; on Jean-Baptiste Lamarck, vitalism, and Romantic-era natural history, and his journal article on Robert Bloomfield, Wordsworth, and Romantic genre transformations won the 2016 Ralph Cohen Prize in New Literary History. Cantonese is also co-editor of the small poetry press Golias Books.

Zayla Crocker studies horror, race, gender, and sexuality and how these intersecting ties are utilized within popular media throughout American history. Specifically within film, television, novels, and video games, Crocker is interested in how these various mediums relay American history through a horror/gothic lens.

Dana Maller is interested in theory, Postcolonial Studies, and the Global Anglophone.

Adrin Martin has interests that are ever-evolving. His undergraduate thesis examined the implications of metaphor as used in Obsessive-Compulsive Disorder treatment texts, which was a study intended to dissect language as a tool that demands authorial sacrifice. Martin’s interests also extend to digital rhetorics, game studies, technology discourse, and film and TV. Some topics in these fields that encapsulate my interests include the study of review scores as aggregated on websites like Metacritic and Rotten Tomatoes, observing the rhetorical nature of industry competition and discussing accessibility in near-universal technologies like streaming services, smartphones, and gaming.

Lara Pur studies women writers and controversial texts of the Early Modern period. More specifically, she is interested in the ways that controversies and social norms outside of texts affect literary meaning within those texts. Other areas of interest include feminist theory, the occult in literature, Marxist theory, and classical Greek.

Rachel Rackham is interested in British Victorian literature. Specifically, she is interested in ruins, material culture, and imperialism in the Victorian era, interests which were shaped by her studies in literary tourism and heritage in her MLIS degree. Rackham plans to expand her studies in these topics by exploring print media and culture, industrialization, commodity culture, memory, and nostalgia in nineteenth-century Britain.

Lexi Toufas is interested in the reception and evolution of early Christian figures, texts, theologies, and tropes through the late Middle Ages into the Early Modern period in both literature and art. Toufas’s research interests also include the diverse roles of women in religious settings and the creation of apocryphon in these periods.

Cody Ward studies modern and contemporary American Literature (1900-Present). Ward is particularly interested in Literature of the American South and in African American Literature. His recent work has centered on the author’s study of Thomas Wolfe and Cormac McCarthy, Appalachian Literature, and editorial and textual studies on the Black Arts Movement. Ward has been working through the Thomas Wolfe material in the Wilson Special Collections for a piece on Wolfe’s inspirations. His professional publications include two upcoming pieces, one on Thomas Wolfe and Intertextuality for the Thomas Wolfe Review and one on editorial scholarship and Af Am poetry anthologies for the South Atlantic Review. 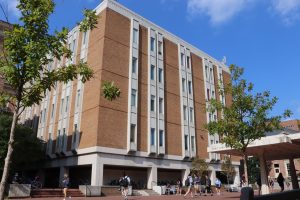