Allison Bigelow, an alumnus of the Department of English and Comparative Literature doctoral program and Tom Scully Discovery Chair Associate Professor of Spanish at University of Virginia, recently won the MLA Prize for a First Book.

Prof. Bigelow’s first book, Mining Language: Racial Thinking, Indigenous Knowledge, and Colonial Metallurgy in the Early Modern Iberian World, “is the first book-length study of the technical and scientific vocabularies that miners developed in the sixteenth and seventeenth centuries as they engaged with metallic materials…By carefully parsing the writings of well-known figures such as Cristóbal Colón and Gonzalo Fernández de Oviedo y Valdés and lesser-known writers such Álvaro Alonso Barba, a Spanish priest who spent most of his life in the Andes, Bigelow uncovers the ways in which Indigenous and African metallurgists aided or resisted imperial mining endeavors, shaped critical scientific practices, and offered imaginative visions of metalwork.”

Read an interview with Prof. Bigelow about her research and writing process below:

What inspired you to start on the initial research that would eventually lead you to write Meaning Language?

“After I finished my undergrad degrees in Spanish and English, I moved abroad and began teaching English and providing language services (translation, simultaneous interpretation) in Chile. At first, I was placed in Santiago as a consultant at global multinational firms like Citibank, Proctor & Gamble, and 3M. After six months, I moved to a “hardship” position working on-site in BHP-Billiton’s Cerro Colorado asset. I was 4×3, meaning that I taught 4 days in the mine site (2500 meters above sea level), 1 day in the coastal city of Iquique, and had 2 days off. My classes ran from 8 am until 9 pm when I was on site, and I was one of approximately 7 women working among 1,200 men. One day I was too tired to walk up the hill from the dining hall back to my classroom/office, so I was waiting for the shuttle. Two miners walked past me and one said, looking at me but ostensibly talking to his friend, “Oye hueón está tan rica la mina.” This could mean “that woman is really hot” or “that mine has very good ore.” Although this was, in theory, a violation of company policy, it was also a very smart way to use the technical language of mining and metallurgy in order to say what he wanted to say. I suspected that historians of science may have missed some of the gendered, sexualized, and racialized ideologies that coursed through technical texts like instruction manuals, patent applications, and treatises, so I applied to grad school at UNC to see if my hypothesis was correct.”

What was rewarding and challenging about writing your first monograph?

“Mining Language required substantial archival travel: several 6-week stays in Bolivia; multiple 2-4 week stays in Spain, Peru, Cuba, and England; and lots of US-based archives (New Mexico, California, Connecticut, Illinois, North Carolina, Rhode Island). It’s not the kind of book that I could write now, with a toddler at home and another kid on the way. Intellectually, my biggest challenge was to try to find evidence of Indigenous, African, and South Asian knowledge production in colonial sources from the Americas and Goa. Colonial authors either actively try to silence non-European ways of knowing or, equally often, are oblivious to the ways in which subaltern technologies have shaped their own scientific theories and technical practices. Working with highly fragmented linguistic data — there are only 6 complete sentences of Taíno, for example — meant that I had to be methodologically flexible and creative. Wherever I could find a source that might shine some light, I had to figure out a way to read around its silences and make it sing.”

Where do you see your research going from here?

“I had planned to write a book based on the second half of my dissertation from UNC, one that would study the relationship between gender and pre-1492 to early colonial-era agricultural technologies in maize cultivation in Yucatán (where men grow crops) and the Chesapeake (where women farmed). In Spring 2021 I was asked to co-chair a presidential committee to determine what to do with one of UVA’s many racist statues on campus. Working with colleagues from the School of Architecture, Memory Project, and Monacan Indian Nation, we developed a policy for removing the George Rogers Clark statue and instituting UVA’s first-ever formal series of Tribal consultations. I did the primary and secondary source research (journals, maps, diaries, published articles and books, oral interviews) to identify 67 Tribal Nations who needed to be invited to consult, based on their historic contact with Clark. In Fall 2021, I co-chaired round 2 of the committee with Teresa Pollak of the Monacan Indian Nation. We oversaw a 4-month process of Tribal consultation and are now working with UVA to implement Tribally-identified priorities for landscape and institutional reform. UVA Press has expressed interest in a book about the statue’s history and the future-facing work we’re doing. I texted my editor a handwritten outline last week, and it looks like that’s what I’ll be working on for the next couple of years. Ideally, the book will come out around the time that we finish remaking the park from a historic space of harm into a contemplative space focused on Native American history and Indigenous futurism. After that, I’ll get back to my book on corn.

I’m also working on a separate project to use the Maya K’iche’ narrative Popol Wuj to support contemporary language revitalization efforts in Mexico and Guatemala. My co-PIs are Rafael Alvarado in UVA’s School of Data Science, Maya Tz’utujil linguist Ajpub’ Pablo García Ixmatá of the Universidad Rafael Landívar, and Yukatek linguists Miguel Óscar Chan Dzul and Irma Pomol Cahum of the Universidad de Oriente. Our work is currently funded by a $249,101 grant from the National Science Foundation. I’m learning a lot about project management and federal grant reporting, as well as community-driven research and digital humanities.” 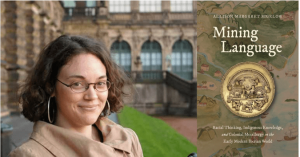