The National Endowment for the Humanities (NEH) announced on January 11 the recipients for $24.7 million in grants in humanities research–and among them was a project by the Department of English and Comparative Literature and the Digital Literacy and Communications Lab led by Dr. Courtney Rivard devoted to developing a Critical Games Studies minor.

The grant totals over $54,000. According to Dr. Rivard, the project, entitled “Integrating Storytelling & Critical Game Studies into the Curriculum,” will begin in July 2022 and “aims to provide faculty and graduate instructors with training and resources to teach and research with games.” Subsequently, the department will submit a proposal to establish the minor.

Dr. Rivard explained that the project is directed at analyzing the centrality of narrative to video games, as a medium. “Games have become a dominant cultural form in the US and throughout the world” that are in need of “a humanistic analytical lens to understand how they both shape and are shaped by structures of power and cultural representation” Dr. Rivard said.

“I believe that such analysis can bring critical perspective to games, as well as create possibilities for the creation of alternative playful spaces that embrace difference,” she added.

The NEH grant continues the work on critical game studies of Rivard and the DLC lab gaming team, including David Hall, Stephanie Kinzinger, and Doug Stark, that began in 2019 with the creation of the Greenlaw Gameroom, UNC’s first game based classroom.

UNC is one of over 200 recipients of NEH grants throughout the United States, whose projects range across history, literature, philosophy, and the digital humanities.

Congratulations to Dr. Rivard and all members of the project! 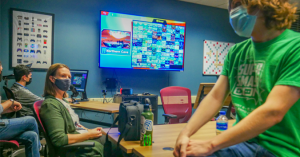