This Fall, as the university transitions to in-person learning, the Department of English and Comparative Literature is welcoming a cohort of twelve new PhD candidates! Their interests span a variety of fields, periods, and methodologies, and the department is ecstatic to have them.

Ryan Carroll is interested in mediation and media technologies in Victorian and transatlantic literature, particularly in the way that 19th-century writers theorized and performed the concept of mediation. His interests also include literary theory and form, hermeneutic phenomenology, Caribbean literature, and religion.

Amy Chan is interested in studying the lyric poem in the 19th and 20th centuries.

Madi Hester researches contemporary American literature from 2000 to present. She is absorbed by questions about mixed-race identity, and how multiethnic and multicultural subjects “rightly” identify themselves and are identified. She also examines what makes writing literary, who creates literature, and how digital media challenges and expands those definitions.

Audrey Gibson is broadly interested in 20th century American literature, with particular emphasis on Southern and multiethnic writing. Her previous research has focused on French-language poetry, particularly Afro-Creole literature, situated in New Orleans during the Civil War and Reconstruction. This research explored the construction of identity and community through language, publication, education, religion, and political involvement.

Tim Gress’ research focuses primarily on the literary and cultural history of Britain during the 19th century, especially as it relates to the history of the book. Other interests include lesser-known women writers of the late-Romantic and early-Victorian periods, the history and development of the novel in English, descriptive bibliography, and book collecting. Tim also works as a Graduate Assistant in the Rare Book Collection at Wilson Special Collections Library.

Izzy Howard specializes in Medieval literature and Digital Humanities. Their research broadly involves concepts of sexuality and gender in Middle English literature and the analysis of early English texts using digital methods. They have engaged in digitally researching the form and representation of two romance texts found in TCD MS 432, a manuscript miscellany compiled between the 14th and 16th centuries. They have also collaborated with the Perseus Digital Library in tagging and annotating Old English treebanks of Beowulf.

Charlie Lee is interested in video game studies, digital rhetoric, and digital composition pedagogy. My previous work looked at the horror video game Amnesia: The Dark Descent and its uses of virtual spaces to generate affects of fear and anxiety. Currently, he is interested in studying competitive e-sports titles such as League of Legends and Starcraft II to understand how their fast-paced forms of gameplay require and generate new forms of literacies.

Josy Raheem is interested in satire and parody in poetry, film, and television.

Joshua Ripple is primarily interested in 20th-century Southern literature, but also has interests in philosophy, film, anthropology, science fiction, religion, comparative literature, “and approximately everything else.”

Carson Watlington is a PhD student in the department of English & Comparative Literature and the Graduate Assistant for Film Studies. Her work is rooted in 20th/21st century American Literature, with a particular attention to minority and ethnic texts. 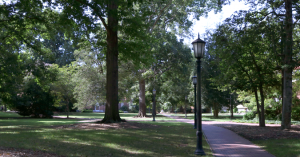