Read more about Fertig’s research and future plans below:

“My research focuses on queenship narratives and women’s sovereignty in literature by exploring the representation of Mary Stuart, Queen of Scots in literature of the eighteenth century. Mary Stuart was a sixteenth century queen, and in the eighteenth century, she became a popular figure in women’s historical writing as a way to explore concepts of maternal inheritance, political enfranchisement, and persecuted womanhood. My texts include histories such as David Hume’s History of England (1754–61), novels such as Eliza Haywood’s translation of Mary Stuart, Queen of Scots (1725) and Sophia Lee’s The Recess (1783), as well as modern film adaptations of Mary’s life, such as the CW TV show Reign and the 2018 film Mary, Queen of Scots.

In addition to my research, I also run a successful virtual public humanities program called ‘Jane Austen & Co.’ (janeaustenandco.org). This series focuses on women’s histories in the long eighteenth century, examining historical, literary, and cultural influences on Jane Austen and other women living during her time. Our program has seen audiences of up to 300 people from around the world.

I see myself equally as a scholar and a public humanist. In the future, I hope to continue pursuing my academic research while bridging the divide between community and university spaces through engaged public scholarship.” 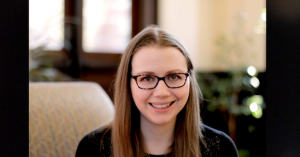