CHANGE: Due to weather conditions and travel, Rev. William Barber II will not be able to attend our reading tonight. We look forward to a reading and Q&A with North Carolina Poet Laureate and social activist Jaki Shelton Green! Tune in on Thursday for a Panel on Environmental Justice with Jaki Shelton Green, Rev William Barber II, and NC Attorney General Josh Stein, moderated by WUNC’s Leoneda Inge.

Both events will be virtual and are open to the public: “A Reading, Conversation, and Q&A with Rev William Barber II and Jaki Shelton Green,” with Gene Nichol moderating, will be taking place on Monday, February 22 at 7:30pm and “A Panel on Environmental Justice with Rev William Barber II, Jaki Shelton Green, and N.C. Attorney Josh Stein,” with Leoneda Inge moderating, will take place on Thursday, February 25 at 3:30 pm.

Register to attend both events at https://englishcomplit.unc.edu/program/hanes/.

Rev. William Barber II’s mission has been, in his own words, “to help people look at public policy through the lens of our deepest moral values, both constitutionally and religiously.” A 2018 MacArthur Genius Grant Fellow and recipient of The News and Observer’s Tar Heel of the Year Award, Barber has pastored the Greenleaf Christian Church, in Goldsboro, North Carolina since 1993. As President and Senior Lecturer of Repairers of the Breach and co-leader with Dr. Liz Theoharis, of the Poor People’s Campaign: A National Call for Moral Revival, he has espoused a grassroots form of moral activism, moving beyond the labeling of societal issues facing our state, and the nation, as “left” and “right.”

Barber passionately engages in broad-based coalition building, working with allies from diverse communities, within and beyond faith-based organizations, to confront systemic racial and economic injustice, environmental devastation, and public policies that further limit access to basic living needs. This engaged social justice advocacy contributed to the growth of the Moral Mondays movement, a protest of regressive policies held on the doorsteps of the North Carolina state legislature, which began in 2013 and spread across the nation.

Barber earned his Bachelor of Arts in political science at North Carolina Central University. He subsequently earned a Master of Divinity from Duke University, a Doctor of Ministry from Drew University, and honorary doctorates from several universities, most recently Wesleyan University. He is the author or co-author of four books, Forward Together: A Moral Message for the Nation (2014); The Third Reconstruction: How a Moral Movement Is Overcoming the Politics of Division and Fear (2016); Revive Us Again: Vision and Action in Moral Organizing (2018); and We Are Called to Be A Movement (2020). Barber has served as the Executive Director of the North Carolina Human Relations Commission and has been honored with the Order of the Long Leaf Pine, North Carolina’s highest citizenship award. He served as the President of the North Carolina State Conference of the NAACP (2005-2017) and as a National NAACP Board Member. He is married to Rebecca McClean Barber; together, they have raised five children.

“It’s not an alarm clock that wakes me up, it’s purpose,” says Barber. His life and life work reflect an urgent need to wake up Americans to heed our better angels and strive for a more just, equitable, and compassionate human community.

Jaki Shelton Green is similarly moved by the promise of bettering human community. Through her art, she pays homage to those who came before us and seeks their guidance for our path forward.

Green is a much-admired poet, teacher, and community arts activist. Appointed by Governor Roy Cooper as the ninth North Carolina Poet Laureate, Green is the first African American and third woman to hold the position in its 72-year history. She has published eight poetry collections: Masks (1981), Dead on Arrival (1983), Swiss Time (1990), Conjure Blues (1996), singing a tree into the dance (2003), Breath of the Song: New and Selected Poems (2005), Feeding the Light (2014), and I Want to Undie You (2017).

Expanding her voice, Green recently released an album, The River Speaks of Thirst (2020), which celebrates the wisdom and creativity of Black communities and combines the language of protest and poetry. Green’s poems honor her maternal grandmother, whom she describes as “a woman of the earth, a nature woman.” According to Green, her grandmother instructed her to “tell the story, and there are many stories that you must tell, and you must help other people tell stories.”

With impressive commitment, Green has taken on the charge to tell the story and to help others tell theirs. In doing so, she has created supportive communities and received merited recognition. She is the founder of SistaWRITE, a community that brings women together to celebrate their voices through writing. Her awards include the 2020 Shaw University Ella Baker Women Who Lead Award, the 2020 St. Andrews University Ethel Fortner Arts Award, a 2019 American Academy of Poets Laureate Fellowship, a 2019 Orange County Bahá’i Light of Unity Award for promoting unity and diversity, and the 2016 Kathryn H. Wallace Award for Artists in Community Service. In 2014, Green was inducted into the North Carolina Literary Hall of Fame. She has held writer-in-residence positions and given numerous guest readings and lectures. Green currently teaches Documentary Poetry at the Duke University Center for Documentary Studies.

Green is a native North Carolinian. Born in Efland, NC, she speaks of the interconnectedness and interdependence of those who live in small towns. Given a notebook at a young age so she would stay quiet in the church, Green has built a life and career filling those blank pages and giving so much to ensure we may continue to tell the stories that must be told.

In addition to participating in the reading and panel, the writers will be meeting with our Creative Writing students and with a group of local high school students. We thank the Hanes Family for its generosity which makes possible these wonderful opportunities. 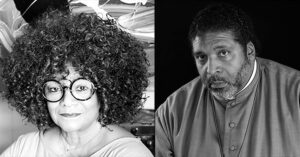