This semester, Professor Florence Dore is teaching English 408: Collaboration: Composers and Lyricists. A musician with significant songwriting experience of her own (her album Perfect City was released by Slewfoot Records in 2001), Professor Dore was inspired to create this class both by her scholarly research and musical history.

“While teaching classes in literature at UNC,” Dr. Dore explains,  “I found myself listening to music in a new way, learning about its historical influence in literary domains.” Her interest in music led to a new idea for a book focused on Southern rural vernacular ballads, rock and roll and their relationship to literature in the South. In 2016-2017, Robert Newman, the head of the National Humanities Center, gave her the opportunity to bring her book ideas to life by organizing two public conferences that year. She says that “these events allowed me to engage with some of the finest thinkers and practitioners of the art of songwriting alive today: songwriters Richard Thompson and Steve Earle, music writers Peter Guralnick and Greil Marcus, and novelists Roddy Doyle and Jonathan Lethem. Following these conferences, in 2018, Dore published her book Novel Sounds: Southern Fiction in the Age of Rock and Roll.

After completing her book, Professor Dore says that she was “irresistibly drawn back into the craft aspect of [her] interest,” so she began writing songs again and is currently at work on her second album. All of these experiences coalesced, igniting her desire to teach a songwriting class within the Creative Writing program at UNC.

Professor Dore has had to adapt her class significantly in the face of COVID-19 and distanced learning. To make these changes she drew on her own experience of creating a musical community amidst the pandemic. During the initial lockdown, she and her bandmates created songs even while scattered across states. Dore says that “this process allowed me to stay connected to my band even as we were separated by COVID-19, and I wanted to figure out ways to bring this sense of connection to my songwriting class.”

The class uses a multitude of social media and virtual platforms to stay connected with one another and to circulate the music they are creating. They use an Instagram account, a YouTube channel, a chat room, Spotify playlists (linked here and here), and a VoiceThread playlist. She says that while the class would be better if they could meet in person, “these days the virtual experience can do a lot to soothe people’s sense of isolation. Social media has a big role to play in staying connected and inspired. Insta, FB and Twitter allow musicians to continue to connect with our audiences and that lets us know that it’s worth it to keep going.”

Part of the way the students are using these platforms is by “making videos of themselves covering ‘teaching songs’ (which are songs we listen to and analyze in order to study the craft) and we post them on YouTube.” Professor Dore says that “they are making really interesting videos linking their music to those teaching songs.” Rachel Carney, class of 2021, says of the class that one of her favorite things has been “getting to collaborate with people to write songs.” She also commented on how, due to the online nature of the class, she and her classmates are actually accumulating a great deal of experience in production as well as song-writing. She says she “really enjoy[s] producing and it has encouraged [her] to improve [her] skills.” Carney enrolled in ENG 408 because she was hoping to get better at songwriting, and she says that “this class has really helped open my eyes to writing in different genres.”

Faith Jones, a former student who took the class in 2019, writes that her experience in the course taught her that “collaborating with others benefits the creative process,” and ultimately “resulted in some amazing music.” She also commented on the generative environment of the class, saying that “As songwriters, we’re often our biggest critic, so to have support deeply ingrained in the class culture was so meaningful.” To explore the class’s wonderful work, feel free to check out their YouTube channel, linked here.

To supplement the breadth of virtual song sharing they are doing, the class is also planning for an outdoor concert at the Forest Theatre at the end of the semester. The students will be the only ones physically present, but they will livestream the event to make it accessible to any and all who would like to watch it.

Professor Dore would also like to add that she is “deeply grateful to Bland Simpson and Daniel Wallace in our magnificent Creative Writing Program for allowing me to teach this course. ”She hopes that her students will glean from this class “a sense of renewed commitment to artistic craft” and remarks that “right now it’s easy to feel like quantifiable experience is all that matters,” but she wants her students to remember that quality matters just as much, and that “songwriting is all about clarifying aspects of the human experience that cannot be measured in charts and numbers.”

The class will also be doing a livestream on Saturday November 7, at 7pm at their YouTube channel which you can find here. Check it out! 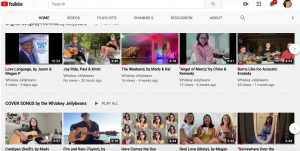