Dr. María DeGuzmán has been appointed the Eugene H. Falk Distinguished Professor, an endowed professorship bestowed by the college.

Dr. DeGuzmán has taught at UNC since 1999, and she founded The UNC Latina/o Studies Program in 2004, one of the first programs of its kind in the US Southeast.

DeGuzmán describes her research as “a combination of US Literary & Cultural Studies, ‘American’ Studies, and Latina/o Studies.” Her first book, Spain’s Long Shadow: The Black Legend, Off-Whiteness, and Anglo-American Empire (University of Minnesota Press, 2005), combines geopolitical and socio-economic analysis with an historically informed Lacanian psychoanalysis. The book turns the lenses of ethnic studies and critical race studies on a socioeconomically, politically, and ideologically hegemonic ethnic group in the United States, Anglo-Americans, to examine the ways Anglo-American writers from the late 18th century to the present represented the Spanish empire as [their] imago / alter-ego rival colonizer and imperial power in the Americas. She says, “The study shows the racializing structure that undergirds the way in which the United States created its empire or defined itself as the good [Anglo-American] anti-empire versus the tyrannical [Spanish] failed empire that was ‘bad’ because it was, among other things, an ethno-racially mixed one, not only in the so-called New World, but, previously, in the Old World.”

Her second book, Buenas Noches, American Culture: Latina/o Aesthetics of Night (Indiana University Press, 2012), focuses on what Latina/o writers, filmmakers, and photographers have been doing with figurations of night. It examines the cultural productions of various Latina/o groups and their uses of night in defining and representing their situations within the United States or in relation to the US’s influence. While the complex variety defies easy summary, the night is connected with ideas of invisibility, hypervisibility, and night as a time of terror (including political terror), of hiddenness, and of immense creativity, possibility, and transformation. She asks “Out of the night, out of dreams and nightmares, what is born?”

DeGuzmán’s latest book, Understanding John Rechy (University of South Carolina Press, 2019) is one of the first monographs on the queer Mexican-American novelist, essayist, and playwright John Rechy, author of the highly controversial but wildly successful 1963 novel City of Night.

DeGuzmán is also a photographer, a musician, and a creative writer. Lately, in addition to her fourth book manuscript, she’s been focusing on that creative work, remarking, “I think maybe the times lend themselves to that approach as they are so dystopian and surreal.”

About the award, DeGuzmán exclaims, “I’m incredibly grateful… There are a lot of people who deserve these awards!” She is especially grateful for being named the Eugene H. Falk Distinguished Professor since his works were interested in phenomenology and existentialism, which DeGuzmán declares “ring with my philosophy of life.” 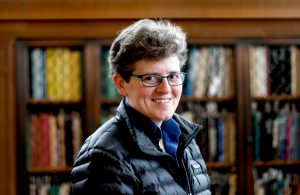