With all that has been happening this semester, we wanted to make sure that we took a moment to give credit to ECL’s amazing honors thesis students. These students, in their final year, worked to produce roughly 35-80 pages of original research into a topic of their choosing.

Below is the list of students, their theses, and their directors. These theses will all eventually be housed in the university library system. The list is as follows:

Alexandria Morgan Andrews, “‘A perilous and terrible medicine’: Milton and the Problem of Divorce in Protestant England,” dir. Reid Barbour

John Collier Cobb, “Consciousness and Natureculture: Tracing Dualisms in To the Lighthouse and Between the Acts,” dir. Pamela Cooper

Jack Crouse, “Dramatic Censorship and the Children of the Blackfriars, 1603-1608,” dir. David Baker

Lenore Harrison, “Virginia Woolf’s Language of Gothic Fiction in The Voyage Out and Between the Acts,” dir. Pamela Cooper 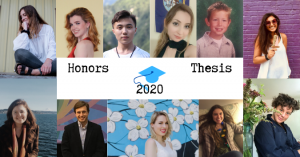